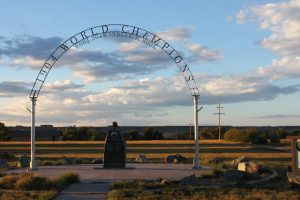 It all started with a question – did I know anything about the Fort Shaw Indian Boarding School?

Well, a few years ago I saw the premier of the film that was made about the Indian girls basketball team that went to the 1904 World’s Fair (and became the champions). And, the History Museum in Great Falls has a display about the team and a companion book to the film.

I had to admit, that was the extent of my knowledge.

After a couple of calls to area historians I learned that there was a memorial about the boarding school and a tribute to the girls basketball team at the site of the former boarding school. The actual school – well, that is still a school that has been remodeled to serve today’s elementary children in the area.

It was almost 6pm by time I started the 30 minute drive to Fort Shaw from Great Falls. That would end up being perfect timing for beautiful evening light. 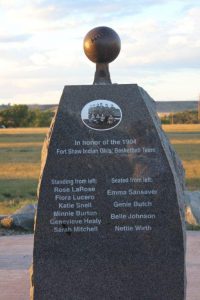 I saw the brown historic marker as I entered Fort Shaw and usually there is a vehicle pull-out right by it. The marker simply had an arrow pointing north though.

I took the turn, driving about a quarter mile, then the road forked. I followed the Old Fort Shaw road which was the left fork.

It didn’t take long to reach the memorial on the school grounds. What a beautiful memorial and some good interpretive panels giving the history of the fort and the boarding school.

There is a photo of the girls who played on the championship team and their names are engraved on the memorial.

Just think, Fort Shaw elementary kids get to see this every day!

Just beyond the memorial you can see a long stone building and that is part of the old fort when this served as a military post. I believe it was the officer’s quarters.

The fort was built in 1867 and it’s purpose was to protect settlers and travelers on the Mullan Road. 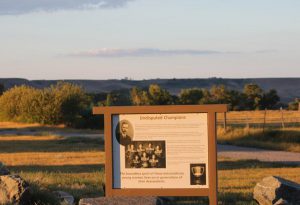 The military fort became an Indian boarding school in 1892 and continued through 1910. Indian children were taken from their families and housed and schooled there from many tribes in Montana, Idaho and Wyoming.

I have driven through the little community of Fort Shaw many, many times and never took the time to turn and look for the old Fort Shaw.

Another interpretive marker east of Fort Shaw tells about the Sun River Crossing which was used by Indians traveling to hunting grounds and also by those on the Mullan Road.

Lots of history in this beautiful country.