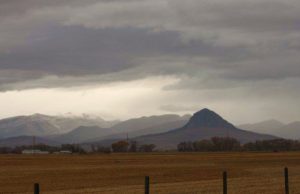 My goal was simple – to have a piece of pie at the Lazy B Bar and Cafe in Augusta.

Some friends had mentioned that the Lazy B had wonderful pie and I decided to check it out and include it on Central Montana’s pie trail. Pie “research” was almost complete except for this one last stop so a little rain wasn’t going to stop me.

I’ve learned my lesson that our local cafes can sell out of pie, even early in the day, so I called yesterday just to see if they would have pie.

I was assured that they would have pie and there would be several different kinds. The person I talked to said she would even leave a note that I was coming.

I got to the Lazy B a little after noon, parked and tried to look inconspicuous as I toted a backpack with camera gear, my Ipad in a case, a folder with forms for the cafe owner to complete and my purse.

Oh yeah, it looked like I was “not from around these parts” as my Mom used to say. 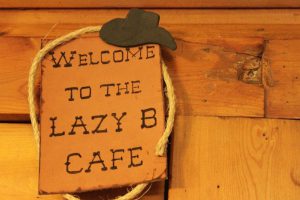 The restaurant seemed quiet with two guys seated at one table and one gal in the kitchen.

I picked a table in the corner so all of my gear would be out of the way. The gal in the kitchen came out and said “you must be the pie lady”. I said I was and that I appreciated the person I spoke with yesterday leaving the message.

A couple of bowls of soup were delivered to the table next to me. Hot homemade tomato soup on a cloudy rainy day was just what  my tummy was looking for!

I’ve learned to pace myself while doing my pie research and I only ordered a cup of soup. Jeez, I ate that and I wanted more soup but figured I had better skip it.

All this time, people were casually coming and going, chatting, kidding each other, and teasing the cook. Everyone who came in the cafe knew everyone else in the cafe. After awhile I realized that I was joining in the conversations!

Now it was time to get down to business. 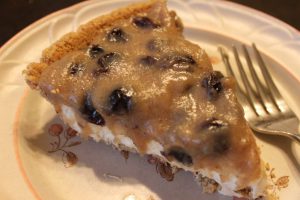 I ordered sour cream raisin pie although the other choices sounded good too – rocky road, apple and strawberry rhubarb.

A guy in the corner named Short heard my order and started telling his pie story.

He told the cook that his wife had a piece of Lazy B sour cream raisin pie at their house the other day. He said he didn’t think he liked that kind of pie but tried it. Then he said it was “damn good, it was addicting, and he ate the entire piece”.

That is a testimony for good pie!

Jami Bouchard owns the Lazy B (she bought it in 2011) and her mother Kerry Bouchard manages it.

They proudly serve beef and pork from Vaughn meats (just down the road) and I also noticed Montana 7 Grain Oatmeal on the breakfast menu. The menu is diverse offering 8 ounce beef patties for burgers, a variety of steaks, salads, homemade pizza, homemade soups, daily specials and homemade pie. 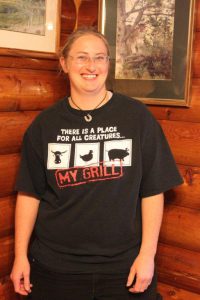 The Lazy B is open seven days a week and serves breakfast, lunch and dinner. And a lot of pie! While I was there, not one person left the cafe today without the question – do you want some pie to finish off that meal?

The bar and cafe are separate and the Lazy B occupies what was once Hotel Augusta. I liked the decor, the friendliness and casual banter of all of the patrons.

And then there is the food. I could have eaten more than twice as much soup as I did, I did not even leave a crumb of pie on my plate, and I’d still like to try their burgers. When I left I realized I had been there over two hours. Two very relaxing and fun hours.

Yes, I get paid to do this job and I meet the nicest people in my travels around Central Montana. Stay tuned for details on our pie trail, have a map handy and start planning your road trips.