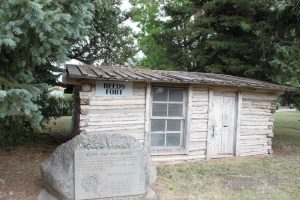 When I was in Lewistown a week ago I took a photo of Reed’s Fort.

I know I’ve driven by it before but I just never noticed it until now. It’s located on Casino Creek Drive and the street curves as you pass by it. Maybe I’ve always watched the street, not the scenery.

After I got home I asked a couple of folks in Lewistown for more information about this fort. It was built and named after a rather sketchy guy named Alonzo Reed and he primarily traded low grade liquor with the Indians. Obviously, that was against the law but this fort was far enough away from anything else to be monitored very closely.

In 1881 it served as a post office for the Fort Maginnis, Judith Gap and Philbrook areas. I learned that in the winter of 1881-1882 the mail was only delivered three times so management was a bit weak here!

Reed and another fellow named John Bowles were partners and you’ll also see this referred to as the Reed and Bowles Trading Post.

Reed had several charges against him – mostly related to gross neglect of the mail service. He finally gave up and sold the fort/post office to Frank Day. The city park in Lewistown is named after Frank Day.

This structure is the original log building and it appeared to be in pretty good shape. It’s great to see a piece of history preserved and available to the public to view. Check it out next time you are in Lewistown!