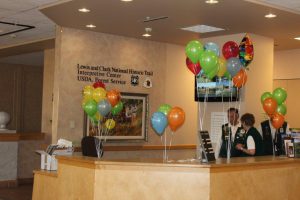 Saturday, August 20, 2011 was THE day that the Lewis & Clark Interpretive Center in Great Falls, MT hosted their one millionth visitor!

The anticipation had been building with media press releases touting the daily count – until they hit 999,900. Then, the sound bites went silent and we all had to wait and wonder when it would happen.

When I got to the Lewis & Clark Interpretative Center this morning it looked like a party was in the plan!

Colorful balloons decorated the entrance foyer and also the front desk. There was a poster on the front sliding door announcing that this was the “month of the millionth visitor” and forest service personnel seemed to be everywhere in their dress uniforms.

The center is fortunate to have a large roster of dedicated volunteers, both on the front line and behind the scenes. They seemed filled with anticipation and eagerness hoping that today was the day they would see their millionth guest. 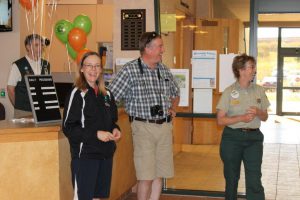 Several of us were hanging around the lobby, sure that the event would happen soon, and wondering if it would be a visitor from far away, at least out of state. It was difficult to wait.

Soon, I saw the center director, Elizabeth Casselli, move in to the foyer and watch the sliding glass doors. In walked two people and the announcement was made!

It was a husband and wife and they said they had always wanted to visit the Lewis & Clark Interpretive Center because they are avid fans of the epic journey. Needless to say, their visit was a very celebrated one.

In honor of being the one millionth visitor, they were presented with an impressive package of gifts. Dining certificates, a Great Falls lodging certificate, an embroidered jacket and cap from the center and, probably the most prized – a Yogo sapphire ring from Sutherland’s Jewelry. 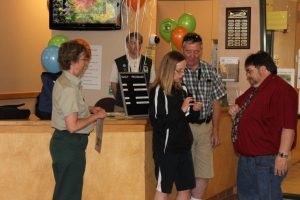 Derek French, owner of the local Sutherland’s jewelry store, was on hand to do the ring presentation. Sutherland’s is a great community booster and they had donated the ring.

Amid much applause and an announcement over the loudspeaker, this couple was welcomed to Great Falls and the Lewis & Clark Interpretive Center.

But, it doesn’t end there.

The Lewis & Clark Interpretive Center is now looking forward to the NEXT million visitors.

As the presentation was over for millionth visitor, another couple came through the foyer and they were recognized as the millionth and one visitor.

Where were they from? Tasmania! 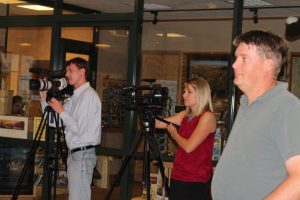 The story of Lewis & Clark’s epic journey is not just interesting to those of us who are citizens of the United States. The couple from Tanzania was also presented with several prizes.

The media was on hand, the Lewis & Clark Interpretive Center was festively decorated and everyone’s mood was happy to hit this notable number.

Congrats to the center for hosting one million and one visitors (probably more by now) and thanks to those visitors who made it all happen.