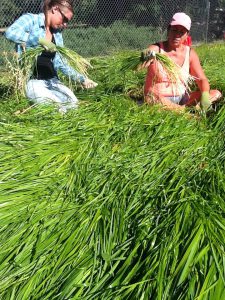 I met the owner of Montana Sweetgrass Etc. a couple of years ago at the Made in Montana Marketplace. Her booth at the marketplace was so pretty and the product so unique – I decided I wanted to learn more about it. Yes, it has taken me two years to get this done!

The only place I had ever seen sweetgrass growing was near Cut Bank, MT and that was many years ago. I wouldn’t have known what it was but my tour guide told me.

Toni from Montana Sweetgrass Etc. has planted sweetgrass and the first thing I learned is that it is a rhizome. That’s a Greek word that means a mass of roots. Roots and shoots actually come from the nodes of the plant. I began to understand  that it is like some of the flowering bulbs I’ve planted. They become rootbound and actually thrive when I dig part of them up and transplant them.

The reason Toni patiently explained this is she was pulling the strands of sweetgrass up by the root to harvest and I was thinking there wouldn’t be any more coming because of that. Well, 10 days later and it’s already coming back! 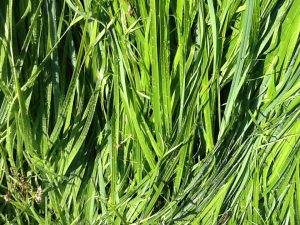 The color of sweetgrass is the prettiest green you can imagine. But, the most amazing quality is the aroma. I have a candle made from sweetgrass (by Toni at Montana Sweetgrass Etc) and it smells wonderful. Not as good as smelling it when you harvest it though.

It had rained the night before I went to the farm to learn about the harvest.

A little moisture probably made it easier to pull the sweetgrass but this isn’t easy work. It hard on your hands to grip and pull. You could either kneel or sit crosslegged to do the job best. I thought it would be easiest to just bend over – an hour of bending and pulling grass and your back would be in rough shape.

After it was pulled from the ground, roots and all, Toni ran her fingers through it and pulled out anything that wasn’t sweetgrass.

She then grabbed it by bundles and we spread it out on drying racks or on the sidewalk. This is when I really noticed the beautiful scent. Wow – it seemed like the more I touched it the more the wonderful aroma wafted around me.

There are multiple uses for sweetgrass. 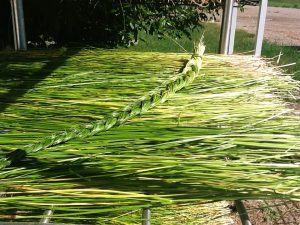 Native Americans use it for ceremonies, typically smudging. The grass is braided tightly when it is wet. It dries and is then lit. The smudge scent smells a lot different than the grass.

You can also display a bundle of sweetgrass, make it into a braid, use the grass as a decoration in a vase and Toni also makes it into candles and linen sprays.

I learned so much about this wonderfully scented grass – I can close my eyes and sense that aroma.

Have I ever mentioned that I love my job – especially getting out and learning things like this!