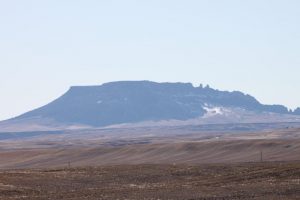 My latest experience was on MT Hwy 80 between Fort Benton and Denton. I’ve driven this route quite a few times and I must say, it is vastly different than US Hwy 87 which runs almost parallel about 25 miles south.

There are two prominent features on MT 80 between the little towns of Square Butte and Geraldine. One is the butte itself – best described as a mountain with its top cut off. The other is called the Shonkin Sag – best described by the name! There really is a sag in the mountains. 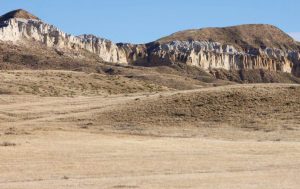 The history – about 50 million years ago the Highwood Mountains had a volcano that erupted a rock called shonkinite. It is dark colored and similar to basalt. About 65 million years ago magma injected eastward between layers of sandstone along the shores of a broad inland sea. In this area that magma bulged up to form a high steeple-like blister or laccolith. The laccolith solidified and formed Square Butte’s flat top. Vertical cracks that fed magma to the laccolith radiated out from the center of the volcano and are now called dikes.

During the Bull Lake Ice Age 70,000 – 130,000 years ago, the continental ice sheet spreading south from Canada blocked the Missouri River, backing up its water to form Glacier Lake Great Falls. The glacial meltwater poured eastward through the Highwood Mountains to create the Shonkin Sag.

That is incredibly detailed information but it describes these unique formations well. 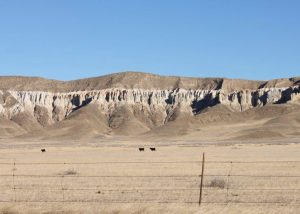 Now, a funny story. I had stopped my car along the edge of the road to take a photo. A pickup truck came by with two older gentlemen in it. The truck stopped, the driver rolled down his window and said “hey lady, I bet you are trying to get cell phone reception out here”. I told him no, I was just taking photos. Then he told the other gentleman I was taking a photo. The guy then said, a photo of what? The driver said, darned if I know and off they drove.

Yes, they thought I was a little crazy but that’s OK. I had a great day, took some beautiful photos and I learned a lot too. Scenic drives, driving for pleasure or a Sunday drive – call it what you want, Central Montana is filled with hidden gems just waiting to be explored.