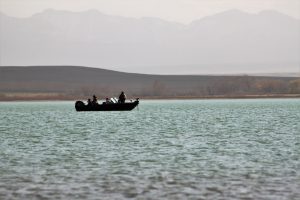 I was on my way to a meeting last week where the route took me through Valier. My plans were to try and get photos of sunset over Lake Frances on the west edge of Valier but I was too early.

Instead of being disappointed I found lots of photo ops that I hadn’t even considered.

First of all, everyone goes to Freezout Lake Wildlife Management Area between Fairfield and Choteau to view the snowgoose migration. I must say, it is spectacular at Freezout, but Lake Frances had some late snowgeese too.

With camera and iPhone in tow, I parked my car on the east side of the lake and started walking. It was so peaceful, quiet and serene until…I came up on some young birds. I’m guessing they were young grouse or possibly hungarian partridges. They waited, probably hoping I would go away, then when I was about 3 yards from them they flew. Yikes, I wasn’t expecting that on this calm and quiet afternoon! I was able to get another look at them on my return to the car and made my way cautiously towards them and watched them fly again. 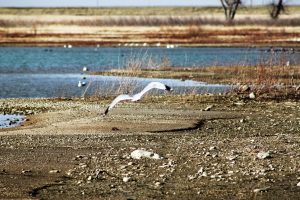 There was one fishing boat on Lake Frances this Saturday afternoon with three fishermen. I didn’t get to visit with them to see if their day had produced anything for the frying pan but even if it didn’t, a day on the lake is…better than not being there!

Lake Frances is a popular summer fishing water and also an excellent location for ice fishing. This past winter the ice didn’t hold and Valier’s annual ice fishing derby had to be cancelled.

Lakeside camping is available at Lake Frances with well maintained campsites. I saw two self contained fifth wheel units there and I’m guessing they might have belonged to the fishermen on the lake. The campground really is lakeside yet you are literally blocks away from restaurants, a grocery store and convenience store with gas and fishing gear.

Valier also has a small motel and The Stone School Inn, a bed and breakfast in a former Valier school.

I was able to get a few photos of the snowgeese and when I thought about it, Valier has everything a migrating bird would want – water at the lake and grain fields all around it.

I love to see the black tipped wings on the snowgeese when they fly. The birds were putting on a show for me and giving me plenty of opportunities to take photos.

My brief 45 minute stop at Lake Frances put me in a good frame of mind and I continued on for another couple of hours to my final destination, thankful I took a little time to stop at this small community treasure.