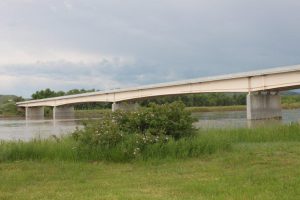 I knew we were getting close to the end of our day long motorized trip through the White Cliffs of the Missouri. Bill Marsik, owner of Missouri Breaks River Co., was keeping an eye on his watch and also on the sky.

First of all, he knew we had a scheduled visit to the museum in Winifred after we got to Judith Landing. Secondly, the sky was starting to change. Those pretty white puffy clouds looked different, which was a signal that our timing for getting off the river was good.

We all had rain gear but that didn’t mean we wanted to get rained on!

I really like this photo, mostly because of the wild rose bush near the river’s edge and the changing sky. If I would have taken a photo immediately behind me, you would have seen the parking area with about 10 vehicles and about a half dozen campers. And, one of those vehicles was mine thanks to our pre-arranged shuttle!

The Judith River flows in to the Missouri near here, hence the name Judith Landing. And, just a bit more history – the river was named by William Clark when the Lewis & Clark expedition traveled this waterway. His sweetheart back home was named Julia and somehow the river was named Judith after her. You’ll also hear this bridge referred to as the PN bridge, named after a local ranch.

We were at river mile 88.5 and we had traveled downstream for about 47 miles. It was a wonderful trip and we would continue to talk about it for days to come. My travel companions enjoyed it as much as I did.