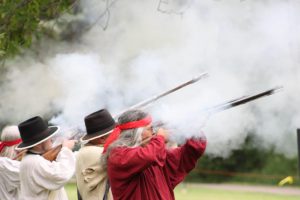 Great Falls hosts the annual Lewis & Clark Festival the third weekend in June each year. Gibson Park (named after the founder of Great Falls) was a perfect location for the festival – lots of shade trees, grass, a bandshell for performers and plenty of room to spread out a variety of activities.

The weather this year was perfect – plenty of sunshine but not too hot.

I took in the opening ceremonies where the Lewis & Clark Honor Guard always fires their black powder rifles to signal the festival opening.

The honor guard dresses in period clothing, most of it handmade by the members. They are sticklers for detail and enjoy bantering about the correct fabric, buttons and head coverings.

Several tipis were erected on the festival grounds providing an awesome backdrop, visible to those driving by the park.Three tipis were also put up next to each other to form a council lodge. Speakers presented at the council lodge and covered topics such as Medicine of the Corps, Uses of Hemp, Firestarting, Fishing Methods of the Corps and Weapons of the Expedition. 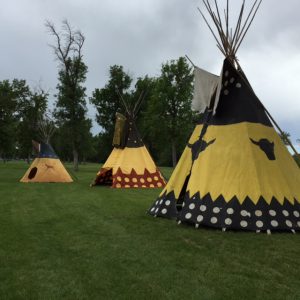 Native American dancers also performed with drummers. This always draws a crowd and it gives attendees some information about the different dances and the clothing worn for each.

A children’s area at the festival teaches kids (and adults) how to trade for goods instead of using money. This year also featured several Newfoundland dogs (they are huge!). Capt. Meriwether Lewis had a Newfoundland dog named Seaman on the expedition.

New this year was a swivel gun, a small cannon similar to what the expedition would have had mounted on their boats. Members of the Lewis & Clark Honor Guard fired the cannon throughout the day and each boom drew a crowd! 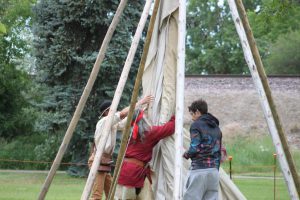 Another interesting demonstration was a blacksmith who always had a crowd listening, watching and learning.

On Sunday of the festival weekend there are float trips (a fee is charged) that take attendees on the Missouri River through Wolf Creek Canyon and also from Morony Dam to the Carter Ferry.