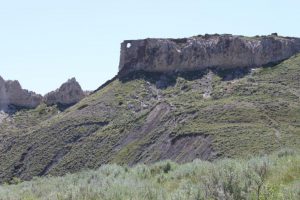 I hesitate to call this a hike to Hole In The Wall. It’s more like a rock scramble when you get almost to the top.

I’ve climbed part ways up here before but never made it all the way to the top. Well, I told myself I was going to do the full climb today. Actually, our river guide Bill Marsik from Missouri Breaks River Co. said, sure you can do it!

This rock is called Hole In The Wall for obvious reasons. I’ve seen some stunning photos of this from the other side with a moon perfectly situated in the hole. That had to be taken by a very dedicated photographer.

It was mid day, not the hottest time of day, but starting to get a little toasty. I made sure I had my hat on (wide brim, it feels hot, and I don’t like wearing it). It’s the savvy thing to do though. The heat and all-day sun can be pretty unforgiving sometimes. 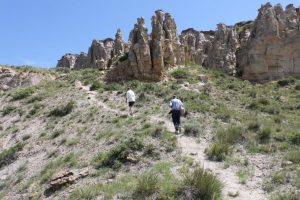 Bill led the way and we took a slow but steady pace. Every now and then we’d stop for what I have always referred to as “breath-taking” moments. The initial climb on dirt and vegetation didn’t seem bad at all…and, I had done that part before.

We met a family of three descending – a mom, dad and nine year old son. They proudly told us they had made it to the top. Even though I mentally calculated their ages at about half that of mine, it still reinforced my resolve to continue the climb.

Our pace remained steady with a few stops to shoot photos. The time of day wasn’t the best for photography but this was as close as we had gotten to this unique sandstone.

When we got to the part where we no longer had dirt and vegetation, just rock, I decided the camera wasn’t going any farther. I would continue, but I wasn’t going to risk damaging the camera. So, I carefully tucked it close to a rock – I had a lot to pick from – and we continued the climb. 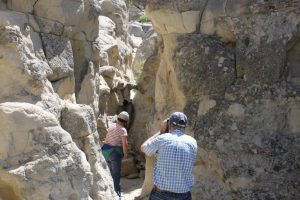 Four out of six in our group made it to the top. Bill was the first to climb each rock, then he’d coach us and have a hand ready for that last oomph.

This isn’t my favorite type of hiking (or climbing) but I’m proud to say I did it and I can now check it off my “to do” list!

This photo shows the end of our group’s descent from the rocky top. I was finally back to where I had stashed my camera so I could once again take photos!

A river trip through the White Cliffs of the Missouri is more than being on the river. It’s great to get out and explore the area and soak up the history.

It was, to say the least, a great day.