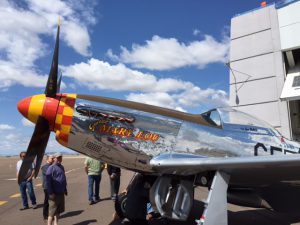 Think back to 1942. The US was supplying the Soviets with aircraft as part of a strategy to defeat Germany during World War II.

The Lend Lease Act (1941) which authorized the plane transfer was actually passed by Congress before the US entered the war, although it was after the attack on Pearl Harbor.

The group that flew the planes from Great Falls to Russia was called the 7th Ferrying Group. I had heard of this group many years ago when I worked with a guy who did communications for them. He talked a lot about it and, I’ll admit, sometimes I didn’t pay close attention to him. He has passed away now and darn, if I could only have one more afternoon to visit with him and watch how animated he could become when he talked about the ferrying group.

The connection between Great Falls and Russia seems odd at first but when you look at a map it all falls in to place. Moscow and Great Falls are on similar latitudes. To top it off, both had records of more than 300 clear fly days per year. 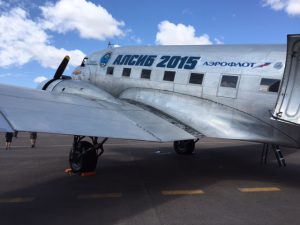 When the 7th Ferrying Group started their route in Great Falls they would then head north to Alaska (Fairbanks). The planes were handed over to the Russians in Fairbanks. This was a tough route and the pilots used what is called the four-course range navigation. Its a Morse Code navigation using just four letters – A if they were too far on one side of the flight path, N if they were on the other side of the line. If they were on course the tone would be even.

The pilots mostly used visual navigation and when you think of the rapidly changing weather conditions it is downright scary! During winter months the pilots didn’t have long daylight hours either. If they had to stop, well, the pilot and airplane would sit overnight in subzero temps. I can only imagine how cold it was and how long it took to warm that equipment (and the pilot) up.

So, what brought these planes to Great Falls? A fellow named Jeff Geer created the Bravo 369 Flight Foundation and that foundation’s goal is to bring these vintage planes to different areas and tell the story of the 7th Ferrying Group.

The crowd at Gore Hill this morning (where the Great Falls International Airport is located) was bustling. I was glad to see so many people eager to learn and re-live this part the the United States’ history. The seven vintage planes were beautiful – rather spartan, no frills, which is to be expected.

The History Museum, located at 422 2nd Street South in Great Falls, Montana, has a nice display about the 7th Ferrying Group. Each time the group had a reunion they would gather at the History Museum. As a result, their records are housed there. 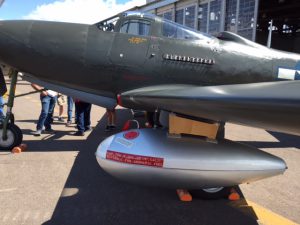 To tally the amount of activity – here’s a summary of what flew out of Great Falls during WWII. Bell P-39 Airacobra, Bell P-63 Kingcobra, Douglas A-20 Boston-Havoc, North American B-25 Mitchell, Douglas C-47 Skytrain, North American AT-6 Texan, Curtiss P-40 Warhawk, and a Republic P-47 Thunderbolt. All total – about 8,000 planes!

What a story – what a beautiful day with a gorgeous sky – what a nice turn-out of eager people to see this morsel of history.