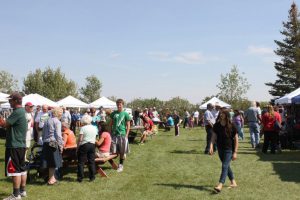 Utica is about half way between Hobson and Windham and it becomes a key location during the Montana Bale Trail: What The Hay event the first Sunday after Labor Day each year.

A huge craft fair with many food vendors happens in Utica during the event and there was also some good live music playing last Sunday. People can wander through the art and craft show, then over to the food booths.

The Oxen Yoke Bar in Utica, known for their huge hamburgers, is also open for cool beverages and food.

The Utica Museum opens for the day and people can stop in and view some very unique items.

This elk mount is displayed at the Utica Museum, on loan by area rancher George Trask, and it is dubbed a Royal Seven. That means the horns have seven points on each side. 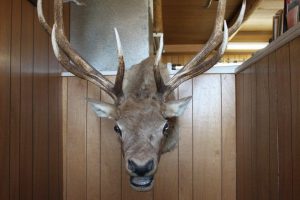 The elk was harvested in the South Fork area south of Utica. It is very impressive and anyone on a Montana elk hunting trip would probably be drooling if they saw this guy in the field!

There is an elk wintering range in the Judith Basin area near Utica and a fair amount of forest service land nearby that is open to the public for hunting.

Utica thrives on the first Sunday after Labor Day but it’s a fun stop year round.