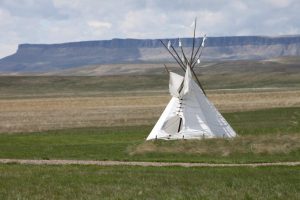 US Secretary of the Interior and the National Park Service director announced this week that First Peoples Buffalo Jump State Park near Ulm, MT has been designated as one of four new National Historic Landmarks.

Considering that there are 50 states in the US, Montana is mighty proud to have one of the new National Historic Landmark designations.

So,what does it take to get this designation? I’m certain there is a ton of paperwork involved! Aside from that, the lankmark needs to be a nationally significant historic place possessing exceptional value in illustrating or interpreting the heritage of the United States.

First Peoples Buffalo Jump State Park hits the nail on the head when it comes to fitting the above criteria. The site is one of the oldest, largest and best preserved bison cliff jump sites in North America. 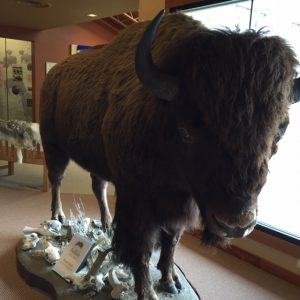 I participated in a group that formed a management plan for the park a few years ago and I was amazed at how many different Plains Indian tribes had used the site to harvest their yearly provisions. In developing the plan it was critical to have input from the different tribes and I learned so much. Each time I visit, and I’m there frequently, I recall aspects of the planning process and I become more impressed with the history at the site.

Visitors frequently ask “Where is Ulm, Montana“? It’s a small town, probably a couple hundred people, and it is just off I-15 about 11 miles southwest of Great Falls.When you exit the interstate (there is good signage for the park for travelers coming from either direction) you drive about 3 1/2 miles north on a paved road.

The landscape is open here with several iconic geographic features – a large square butte looms nearby and the transition from rolling plains to mountains is easy to see. 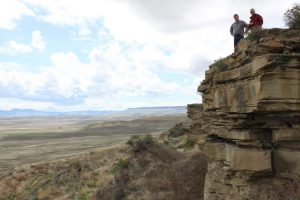 When you turn from the paved county road into the park you see a small visitor center and, in the summer months, one or two tipis stand out. As you look towards the jump cliff face it doesn’t look that impressive. But, wait until you are up on top of the jump and walking towards the edge. The bluff seems almost rounded but as you approach the sloping edge, all of a sudden it becomes a quick drop over rock shelving.

The visitor center has an interpretive hall detailing how the buffalo jump worked. It also has a storytelling circle with information about the different tribes that used the jump and a small gift shop/book store is near the reception desk.

My favorite part of First Peoples Buffalo Jump State Park is the top of the cliff. You can access it two different ways – walking trails lead from the visitor center up the cliff face or you can drive a gravel road to the top of the cliff and then walk along pathways. Either way you go, the views are impressive and the story becomes complete when you see the geography.

There probably won’t be much change at First Peoples but I’m glad to see the National Historic Landmark designation. It’s always been special in my mind and now it is even more impressive.