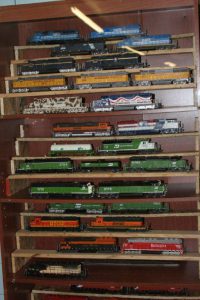 As I toured the Frank DeRosa Railroad Museum in downtown Havre last week, the receptionist there told me about the model train club that sets up in their lower level.

I’ve been to the Railroad Museum several times and I had never heard about the model train folks. Well, it was my lucky day because three of the club members were there “working” on trains. Let’s also call that “playing” with trains.

Two guys and one lady were checking all of the intricacies of different trains, making sure the tracks were all working, testing the switches and the remote control boxes.

They were more than eager to show us their trains!

The entire room had tracks covering several levels, a pretty amazing stacked loop with about four layers of track, tracks running along side each other so trains could bypass each other…I was trying to get photos and kept asking which direction would the train be going and where would it be coming from.

They had me confused for sure! 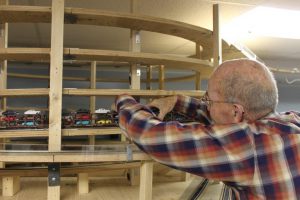 This guy was a retired “railroader” and told about the trains he had worked on. His wife was also very involved in model trains. They told me their club isn’t growing and they plan to have more activities next summer to showcase all they have to offer and possibly get more people interested.

The model train club had an open house during Havre’s Hands On History day last June and they were open for members of the public to come and watch the model trains run every Saturday morning during June, July and August. Those events are also planned for next summer.

But, word to the wise, if you are in Havre and want to see all (don’t ask to see all…unless you have all day!) of the model trains, if you call the Railroad Museum at 406-265-8888 I bet you’ll have several model train club volunteers ready to fire up the engines of these model trains.

We stayed much longer than we had planned to stay. The model trains really are fascinating and so are the club members. If you are traveling through Havre, be sure to check out both the Frank DeRosa Railroad Museum and the model train club.