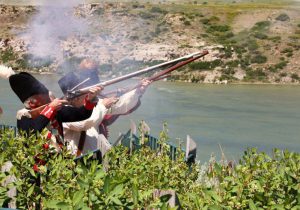 The 24th Annual Lewis & Clark Festival was held this past weekend on the banks of the Missouri River in Great Falls.

Meriwether Lewis, William Clark and the Corps of Discovery traveled upriver on the Missouri over 200 years ago, no small task, and when they were near where the festival was held many obstacles came their way.

First was a series of waterfalls – oh yeah, a bit tricky whether you are going up or down river.

As they portaged the falls, the prickly pear (cactus) played havoc with their moccasins (and feet). And then there were mosquitos, probably caddis and mayflies to top it all off. I’m not even going to mention things slithering in the grass.

There are several dedicated groups that work together to put this unique festival on – the Lewis & Clark Honor Guard, Portage Route Chapter, Lewis & Clark Foundation and the US Forest Service-managed Lewis & Clark Interpretive Center.

The opening ceremony with the Honor Guard is fun to watch. Flags are presented and flag bearers are in period dress, complete with black powder muskets that are fired.

On Saturday of the festival a living history encampment is set up next to the Lewis & Clark Interpretive Center.

Everyone is in period dress and you can wander from tipi to tent and learn about skills used during the epic expedition, how they dressed, how they hunted their food and how medicine of long ago kept their losses to a minimum.

Early Saturday morning a bird walk was held. I didn’t get to that although I wanted to. One request to Captain Lewis from President Thomas Jefferson was to chart unknown (at that time) plant and animal species. It’s interesting to see birds today that were found in this area over 200 years ago, some of them named by the captains.

Those participating in the encampment had lunch served to them that was cooked by these pros – over a hot fire in a large cast iron kettle. 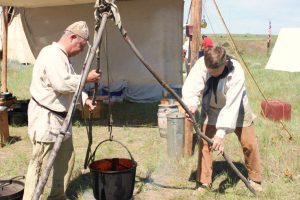 I learned that each person on the Lewis & Clark expedition had a distinct job to do – hunters who were responsible for keeping fresh game available, cooks who probably had to be pretty clever in order to keep everyone fed and scouts who went ahead to see what obstacles they would be facing next.

Sacajawea (spelled several different ways) and her baby Pomp also accompanied the expedition. It’s one thing for me to “go camping” but taking an infant along would have posed more challenges than I could even imagine.

Lunch this past Saturday was elk steak and biscuits…a bit shy on green veggies but I’m sure the Corps of Discovery didn’t worry about the food pyramid. They consumed large quantities of protein in order to pull their cargo upriver – I can’t even imagine how much effort that took, day after day.

The annual Lewis & Clark Festival takes place the last weekend in June in Great Falls. Most events are free although there is a charge for river float.

The Lewis & Clark festival is not only fun and entertaining but it’s educational too. Mark your calendar for 2014 and plan to join this interesting event.