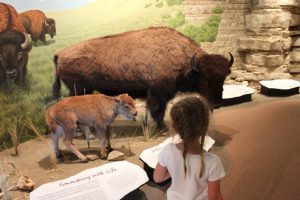 What a neat experience to see kids learning and having fun at the same time.

I took my almost 5 year old granddaughter to First People’s Buffalo Jump State Park near Ulm, MT. It’s just about 15 miles out of town, at most a 20 minute drive from my house.

As you enter the lobby at First Peoples there is a seating area which was filled with a group of people hearing the story of this significant buffalo jump. Just past that area is a large stuffed buffalo (technically a bison) that has been the object of many photos.

My granddaughter was a little cautious around this buffalo. It looked so real and yet it was dead. I explained the taxidermy process a bit, just enough to let her know for sure that the buffalo wasn’t alive. I petted the large buffalo but she said she didn’t want to touch it.

We went in to the interpretive hall and there were more buffalo displayed. One was a calf and it didn’t look quite as intimidating as the large one in the entryway. I explained things as we were walking along and my granddaughter seemed to be enjoying the visit. 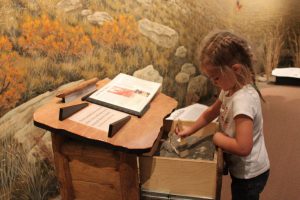 There are several wooden stands with drawers that pull out. Most adults walk by these and don’t bother to open them. Maybe we feel we shouldn’t open drawers, maybe it doesn’t even occur to us to open them! Well, kids open them and my granddaughter was fascinated by the archeology display. Several bones are buried in sand and there is a small brush where you can “dig” for bones. She uncovered, then covered, then uncovered the bones several times.

Another drawer shows bones that were shaped so they could be used for crude spoons or ladles. A large tipi is also in the interpretive hall and you can walk in it and see items used daily by some of the area’s tribes.

First Peoples Buffalo Jump State Park is most impressive from the top of the jump looking down on the interpretive/visitor center. But, it’s good to visit the center first and learn the history of how buffalo were harvested before the use of firearms and also before the introduction of horses.

My granddaughter learned a lot from visiting the center and she had fun too. Can’t beat that!