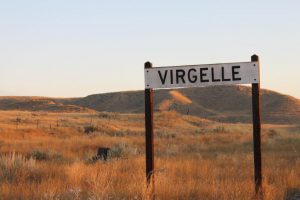 Whenever I mention the very little town of Virgelle I can always tell if someone has been there. Usually I get a puzzled look that says they’ve never heard of the place!

Well, my favorite expression is that there are three exits to the little spot known as Virgelle. Seriously, if you are driving on US Hwy 87 between Fort Benton and Havre you’ll have three options to turn and travel about eight miles to get close to the Missouri River bottom where Virgelle is located.

Virgelle was established in 1912 so it has been around for 100 years.

The town was named for Virgil and Ella Blankenbaker – they combined those first names and out came Virgelle. They original plan was to establish lodging for workers on the railroad that ran near the two-story mercantile building.

Timing is everything they say and when railroad travel begin to fade the town soon followed suit.

What remains today is incredibly unique. When people are looking to vacation in Montana and experience something they can’t find elsewhere, Virgelle should top the list. 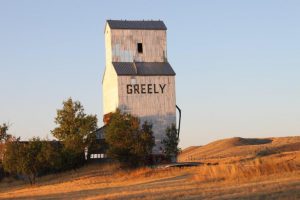 First of all, you are one mile from Coal Banks Landing which is a major put-in or launch site for floating the Upper Missouri River. On that float trip you paddle by the remote White Cliffs of the Missouri which is on many of our bucket lists.

If you go a mile from Virgelle in the other direction you’ll see an old time ferry providing transportation across the Missouri River.

The town is surrounded by fields of wheat so you can be up close to Montana’s agriculture. This area is part of what is commonly referred to as Montana’s Golden Triangle for all of the wheat grown here.

Back to my early morning stroll – I spent the night at Virgelle a week ago and meant to shoot some photos that evening. I spent too much time visiting after dinner, misjudged sunset and missed several photo ops!

So, I was up early with my camera and began a stroll before breakfast. 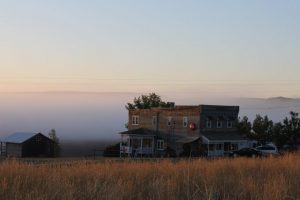 An eerie (but pretty) low-hanging fog had moved in and made my photos look so cool! I had about 45 minutes before the fog lifted and I was able to get a fair amount of photos, with foggy background and without.