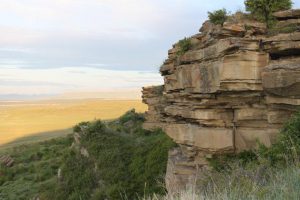 I’m going to say that I was at First Peoples Buffalo Jump State Park at sunrise but I was probably about 30 minutes late. That’s early this time of year! You do capture some beautiful light at that time of day though.

The next park within this park is the actual cliff that served as the buffalo jump. Some people think the impressive square butte that looms in the background is the buffalo jump. Not so, but it makes a very dramatic feature when you are driving to the park.

The top of the buffalo jump is open from 5am to 10pm. There are trails with interpretive signage, restrooms and, off to your right as you walk towards the cliff edge is a prairie dog town. Black tailed prairie dogs and their mounds (homes) dot the landscape. It’s fun to watch these animals popping in and out of their mounds and chirping relentlessly. 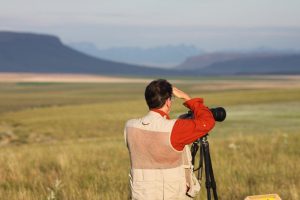 This photo is taken from the top of the buffalo jump, just as you begin walking from the parking area. You can see part of square butte in the background and some early morning mist hugging the mountains nearby.

The prairie dog town runs all through the golden area.

Early morning is probably the best time to photograph the buffalo jump although I’ve taken many pictures at various times that turned out not too bad.

This next photo is one of my favorites that I shot the other day. 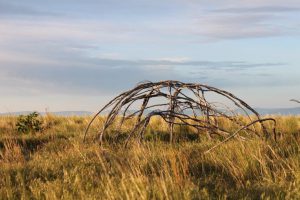 It’s a poignant scene when you see the sweat lodges and you can easily transport yourself back in time.

The beautiful morning light made it even prettier.