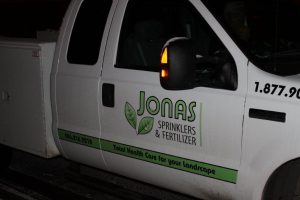 The weather in Great Falls Monday seemed to say – time to think winter and holidays!

Temps haven’t been reaching our typical fall-seasonal highs and the weatherman decided to send us some snow.

The weather must have put the Downtown Great Falls Association and the Downtown Business Improvement District in a decorating mood.

Jonas Sprinklers and Fertilizer was hired to put up lighted decorations on Central Avenue and First Avenue North in downtown Great Falls.

I took a few photos of the crew while they were working.

It was dark and chilly. The crew told me they had to wait until most downtown businesses closed before they could start since they needed to have equipment on the sidewalk to put up the decorations. 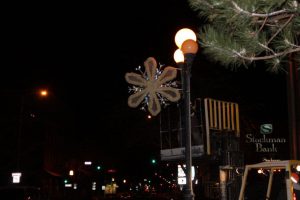 It isn’t easy to see, but behind the snowflake that is getting attached to the light pole is a bucket with a guy in it. All in all, a fairly chilly job for Monday evening’s weather.

The crew was working on First Avenue North near Fifth Street.

Seeing these decorations made me want to head home and do some decorating. Although, it can wait until daylight and warmer weather (hopefully).

The downtown merchants do several events in the next few weeks including a Parade of Lights Friday, November 25 and a Christmas Stroll Friday, December 2 so they want everything to look it’s best.

The Parade of Lights culminates at the Civic Center where the city’s Christmas Tree is lit. There will also be food vendors lining Central Avenue and Showdown Ski Area will host a “Rail Jam” featuring expert snowboarders and skiers at the corner of 8th Street and Central Avenue. There is also live entertainment. 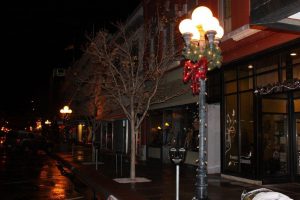 After I took the photo above I drove around the block and looked at the decorations already put up on Central Avenue.

Take a drive in downtown Great Falls after dark and enjoy the beautiful decorations.