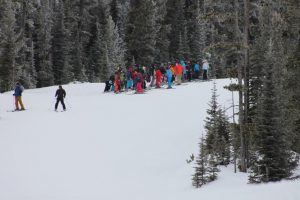 Showdown Montana Ski Area is located in the Little Belt Mountains on the Lewis & Clark National Forest. I was fortunate to spend some time there last week checking out all they have to offer.

First of all, if you’ve ever had to drive on snow-packed gravel roads to get to a ski area, you’ll appreciate being able to simply turn off US Hwy 89 and drive in to Showdown’s parking lot.

Showdown Montana is the state’s oldest ski area. It was originally called King’s Hill Ski Area because it is located atop King’s Hill Pass.

A note of trivia – King’s Hill mountain pass is the highest mountain pass in Montana that is maintained year ’round. US Hwy 89 is a pretty major traffic route, from passenger vehicles to truck traffic so the road stays clear all winter.

I arrived at the ski lodge early, eager to check out what they had. 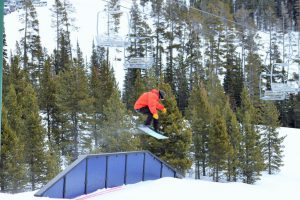 The T-Bar coffee bar was busy and I could smell something yummy baking – that turned out to be homemade brownies. I suspect they were consumed before the day was over!

I saw lots of Showdown’s staff – all busy taking good care of customers. Several school groups were arriving with their chaperones and everyone was helping to get them fitted for boots and skis and then to give lessons and get those kids on the slopes.

The lifts started operating at 9:30am and soon I could see skiers making their way down Big Seven. Groups of school kids were in the lesson area, eager to get on the slopes.

This area was once a motherlode for miners and Showdown’s ski runs are named for former mines. Glory Hole, Ripley, Golden Goose…the names are varied and many. There are 34 ski runs at Showdown and the terrain split is 30-40-30. Thirty percent are green (easy) 40 percent are intermediate and the final 30 percent are black (most difficult). 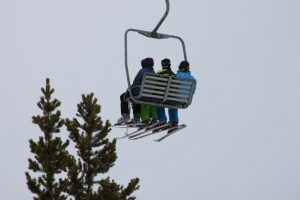 I heard comments about great grooming and that the mountain slopes were in good shape for the amount of snow.

Everyone I saw was having a great time – from youngsters to some definite oldsters, they were out experiencing some pretty amazing recreation.

I was glad to be out of the office! What a great day.