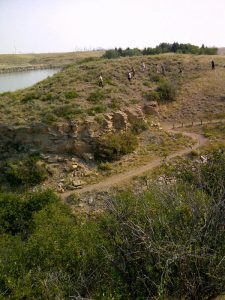 For the last few days a small film crew has been capturing footage either on the Missouri River or on the banks of the river near Great Falls.

A documentary is being made that focuses on medicines used during the epic Lewis & Clark journey. When you consider their expedition, the length of time they were gone and the distances they traveled, it is amazing that only one member perished. And, that was from appendicitis!

Weather has been hot this week so I can only imagine that clothing of the early 1800s is not the coolest and maybe the actors are sweltering!

As I gazed over the river towards the film crew it renewed my interest in the Lewis & Clark expedition. Many people on a Montana vacation are following the Lewis & Clark trail and the Lewis & Clark Interpretive Center located on the east edge of Great Falls is truly a mecca for them. The interpretive center was bustling today and a quick glance around the parking lot told me that people have traveled some very long distances to vacation here.

Sometimes we take for granted what we have in our own backyard!