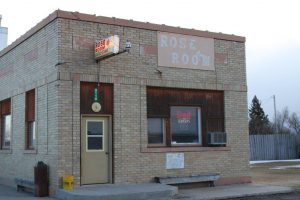 Many people aren’t familiar with the community of Pendroy – it isn’t large by any stretch of your imagination and it probably tips the census count at about 25 people. The location is just off US Hwy 89 between the small communities of Bynum to the south and Dupuyer to the north.

We stopped at The Rose Room in Pendroy, also known as Pendroy’s Finest, the other night for dinner. Our reservations (yes, we had reservations) were for 6pm and we were about 15 minutes early. Doreen, the owner, was there when we arrived but she had a waitress coming so we sat at the bar for awhile.

The Rose Room used to be a bank building many years ago and as you look around you can imagine a teller, bank vault etc. It is almost right on the secondary highway that goes through Pendroy but technically, it is on the south side of the highway.

We moved in to the dining area to our reserved table for four. Three decanters of wine awaited us – white, blush and red wine. The menu was fairly extensive with a good variety of steaks and several seafood choices. 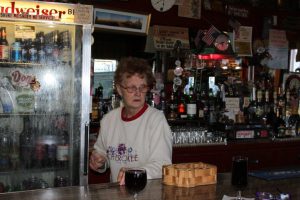 One in our group ordered shrimp (naked, which is not breaded). Doreen said she buys only the best shrimp even though they are almost double the price of what most area restaurants serve and, she recommended the breaded shrimp. When that plate was delivered there were plenty of naked shrimp and, tucked neatly to the side were three of Doreen’s famous breaded shrimp. Just enough to eat to prove her recommendation was a good one!

OK, we knew we couldn’t eat all of that so we opted out of the soup and, believe this, none of us had room for ice cream. It’s a rare day that I turn that down but our meal was so yummy I cleaned my plate and was much to full. 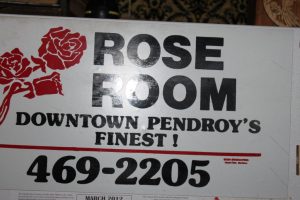 After we told our waitress we wouldn’t be having ice cream, Doreen appeared and asked if anyone had a birthday last month, this month or next month. That’s covering quite a few bases! One of our group has a birthday next month so she was given a box (yes, a full box) of Andes mints. Then came the next round of questions and basically, if you had a birthday in the last 12 months you were going to walk out of Pendroy’s Finest with a full box of Andes mints. And, we all did!

We heard later on that she does that for everyone.

The Rose Room is definitely a trip through time. The decor brings back memories – flocked wallpaper, mirror tiles, carpet on the ceiing.

We made some new memories that night though – memories of a small charming town, memories of the genuine people we met, and some darn good food!

What a fun and unique evening in Pendroy!