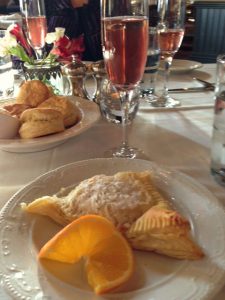 Every Sunday in December the Grand Union Hotel in Fort Benton does a plated and served brunch in the Union Grille restaurant. I’ve been wanting to get there since the first Sunday – I finally got there!

The lobby of the Grand Union was decorated beautifully with just enough decorations to enhance the rich woodwork and warm colors.

I could hear live music coming from the dining room and soon found out it was Rich Matoon strumming his guitar and then playing his flute and dulcimer. A vocalist and accompianist entertained while Rich took a break. What a treat!

We started with cranberry mimosas and they were so refreshing and pretty. Each entree came with an appetizer and I had a yogurt and fruit parfait with the Union Grille’s homemade granola. One other diner at our table had an apple turnover with goat cheese and candied chestnuts. That was worth a photo!

We had a variety of entrees served between the four of us and I chose the carmelized pear and sweet potato quiche. It was topped with candied bacon and baby beet greens and it was on a bed of warm spinach. Ohhhh, yum!

Three of my dining buddies chose eggnog creme brulee for dessert and I had an apple crisp with bourbon caramel and a small scoop of cappuccino chip ice cream. The ice cream really wasn’t supposed to come with my dessert but I couldn’t make up my mind and our waitress said she would give me a sample with the apple crisp. One more ohhhh yum!

What a meal. What a beautiful setting. What a great day.