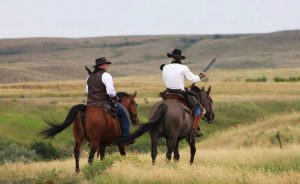 As I roam around Central Montana I meet a lot of folks in many different occupations.

I can now add Train Robber to the list!

Following is a snippet of the conversation I recently had with a fellow who has robbed trains routinely for quite a few years.

Me: so, Bud (full name withheld to protect the not so innocent), how many trains do you think you have robbed?

Bud: gosh, I’d have to sit down and count. Well, there was the year we robbed 22 trains. That was a lot of work! Although, it probably averages about 14 or 15 a year and we’ve been doing this a lot of years.

Me: how has this summer been for train robbing?

Bud: steady, real steady. Every couple of weeks or so we rob a train.

Me: same crew each time? 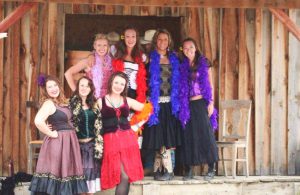 Bud: you know, I’m trying to work my son in to the business. He’s been around train robberies since he was just a kid but it would be nice for him to step up and help out with the business.

Me: is your son trained to rob trains (I said that as a joke but Bud responded seriously).

Bud: oh yes. In fact, he’ll be riding with us tonight when we rob a train.

Bud: you probably will. He’s shy but he rides well.

Me (thinking to myself…a train robber that is shy??)

Me: Do you try to stick to the same game plan with each train you rob? 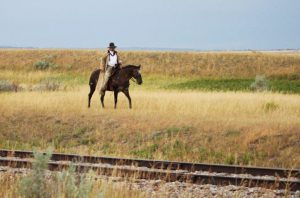 Me: doesn’t the engineer ever figure out that they are going to get robbed?

Bud: yes, she (the engineer is a lady) always slows down for us after coming across the trestle and around a curve.

Bud: yup, we are actually hired to rob the Charlie Russell Chew Choo every night they run!

OK, so much for my spoof but Bud’s responses above were answers to my questions as we “waited around the bend” for the evening dinner train.

We heard the whistle as the Charlie Russell Chew Choo approached the trestle. They are required to do slow speeds over the trestles so it seemed like it took forever for it to cross and come around the bend. Or, maybe I was just excited to witness the holdup. 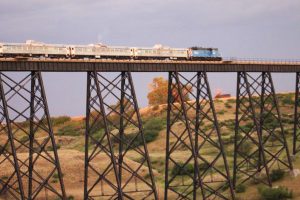 I hid behind the saloon at the “stage” and peered around, trying not to be seen. The passengers I could see looked like they were having a pretty fun time.

After the train came to a halt the robbers entered the cars and gave out Charlie Russell Chew Choo dollars. Then they went back through the rail cars and robbed the passengers of the dollars.

After exiting the train a fight began, dance hall girls came out of the saloon and pandemonium broke out.

As you may imagine, the robber crew does have some “each man for himself” thoughts when money is involved and that creates an interesting end to the robbery.

It’s all fun and games and, as Bud says, “when this is no longer any fun we’ll hand it over to another crew of robbers”.

Believe me, this crew has a good time.

For train schedules visit MontanaDinnerTrain.com or call the Lewistown Area Chamber of Commerce at 406-535-5436.

Oh, remember to bring your camera if you are riding the Charlie Russell Chew Choo. Beautiful scenery, wildlife, and a good natured crew of train robbers!