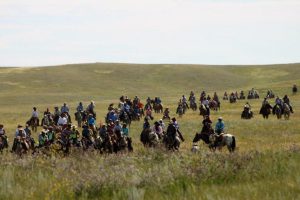 Sometimes you have to be patient.

Thirteen years ago I missed seeing the trail riders complete the last leg of the annual Chief Joseph Ride and enter the Bear Paw Battlefield south of Chinook, Montana. I told myself I wouldn’t miss is again.

The downside – I had to wait thirteen years to see it!

The Nez Perce National Historic Trail is 1,300 miles long stretching from Lapwai, Idaho through southern Montana and then ending 40 miles from the US/Canada border near Chinook. The Appaloosa Horse Club organizes an annual ride covering approximately 100 miles of the trail. At that rate it takes thirteen years to cover the entire 1,300 miles and end up at the site where Chief Joseph of the Nez Perce surrendered.

Some trivia here – in 1968 I was playing in the Chinook High School band and we played for an event at the present day Bear Paw Battlefield. I believe it was a ceremony in honor of this area becoming a state park. 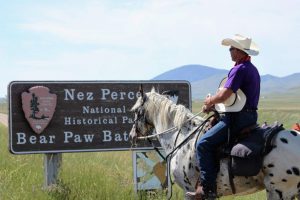 A few land swaps later, much negotiation with the National Park Service, and the Bear Paw Battlefield became one of the park units on this trail.

You’ll hear two different names for the Battlefield – Bear Paw (which is what most locals call it) and Bear’s Paw which is how the legislation passed through Congress. For me, it is the Bear Paw Battlefield.

I tried to find information about this year’s ride to see where their last camp would be and also to determine about what time they would ride in to the Battlefield. Information was tough to come by but I was in Chinook and ready to do some searching. One of the seasonal park rangers estimated that the riders would probably get to the Battlefield about noon.

The last campsite before riding in to the Battlefield was on People’s Creek Road which I guessed would be about 18 – 20 miles. I also figured that a horse probably goes about 7 miles an hour (I was wrong, it’s more like 3 miles an hour). I estimated that they would ride in to Bear Paw Battlefield about 12 noon. 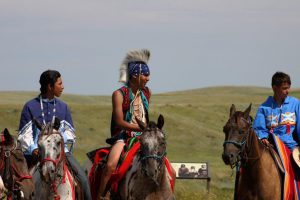 The riders left their campsite that morning at 7am. One rider said he was up at 4:30am to take his tent down, pack it, get breakfast, saddle his horse and be ready to ride. That’s early.

Trail ride oganizers were able to organize a route crossing private ranch land so that shortened things a bit and made it so I couldn’t see the riders until about a half mile from the Battlefield. So much for my goal of getting the riders with no power lines, no irrigation systems in the background and no pavement.

It was really exciting when I saw motion on top of a small hill though. At first I wasn’t sure if it was just trees swaying, but then I realized that more “trees” were appearing! It was the riders cresting that hill. I hopped in my car and got closer for some photos. The riders came through an open gate and then traveled a short distance on Route 240, a paved two-lane county road that goes past the Battlefield and as far south as Cleveland.

There were 165 registered riders and all are supposed to ride Appaloosa horses. One thing I found out, all Appaloosa horses do not have spots or a painted appearance. I spoke with one horse breeder from Washington and he explained how recessive genes can produce solid color horses. This guy had sponsored two Native American youth on the ride.

After all of the riders came in to the Battlefield they left, followed Route 240 north for about a quarter mile then went to the next night’s camping area across the road. It seemed to take forever for them to come back but then I realized they had to tie, feed and water their horses. Most unsaddled and brushed their horses down and the trail ride chef served them lunch.

In about two hours some riders had walked or driven vehicles back to the Battlefield and we watched as about 30 Native American riders in full regalia circled the parking area three times. There was one horse with an empty saddle. Cameras were clicking, people were jockeying for better position and there seemed to be vehicles parked all over. I had a few “photobombs” with people squeezing in to get their photos but, all in all, I was able to get some great photos. 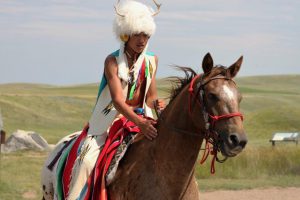 The first night of the five day ride started with a huge thunder and rain storm. Some routes had to be altered because support vehicles would not have driven on the gumbo/mud soil – they would be stuck there until it dried out.

I am so amazed at the stamina of the trail riders. There was a variety of ages who came to honor the memory of Chief Joseph of the Nez Perce who surrended to the US Cavalry at the site. History was retraced, memories were made and friendships renewed.

It was worth waiting for thirteen years to see this.