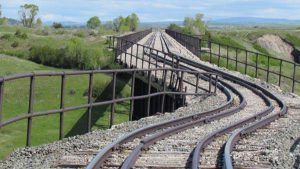 In 2011, when spring runoff came downstream on the Judith River (the river I think should be called a creek because it is usually so small) it was devastating to many landowners. The Lewistown Chamber of Commerce, operator of the Charlie Russell Chew Choo dinner train, also had a loss when the Judith River trestle was basically destroyed.

This photo shows what a former straight track looked like after rushing water twisted the steel girders. It could have doubled for a roller coaster ride!

Water came so forcefully that it moved the piers, displaced the trestle deck and damaged two trestle towers. In a nutshell, the 100-year old trestle certainly wasn’t safe.

It took two and a half years of grant writing and lots of studying to get repair work started. Then it took from December 2013 to August 2014 to complete it.

Here’s a bit of history on this short line railroad in the heart of Fergus County. It was originally constructed by the Milwaukee & St. Paul Railway. Six 2-horse teams carried 20,000 pounds of building materials on a 25 mile trip. Foundation work was started in the winter of 1912 and they steam heated the gravel and packed straw around the concrete forms. 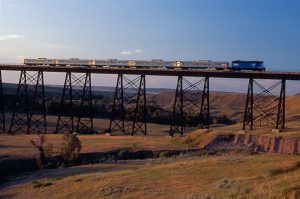 The new trestle construction saw some changes – over 100 years some things have changed! Although, the original steel girders were salvaged and reused.

Today the Charlie Russell Chew Choo is running over the Judith River trestle, and a couple more, plus traveling through a tunnel. A prime rib dinner is served on board and strolling musicians entertain the crowd. Of course, train robbers love to lurk around trains so you just might see some of those too!

The Chew Choo runs every other weekend throughout the summer. Watch a video of the dinner train ride and find details at Charlie Russell Chew Choo.