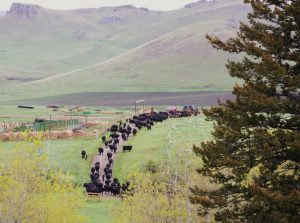 Well, the rain continued during the rest of the cattle drive. I decided it created a pretty atmosphere and I’m sure the cows and horses were glad it wasn’t too hot.

I thought the grass was lush although some of the cowboys said it wasn’t nearly as tall as it had been in previous years.

This photo shows the cattle and riders coming down a dirt road, not too far from the corrals where they started.

The cattle traveled about two miles to get to the adjoining rancher’s pasture.

After going through a couple more gates the cowboys let the cows and calves stop and “mother up”.

I’ve heard the term mothering up before and I associated it with cows but I guess I never really knew what it meant.

When the cows and calves came to a pasture they stopped and the cowboys just waited on their horses while cows found their calves who may have gotten behind them  or mixed in with others during the move. It was interesting to watch all of them “mothering up”. 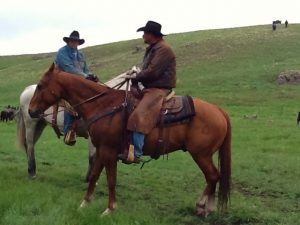 A couple of the calves were pretty feisty at times and one of the cowboys said their natural instinct was to turn around and go back to the former pasture, especially if they couldn’t find their Mom.

It was a fun day and I took many photos.