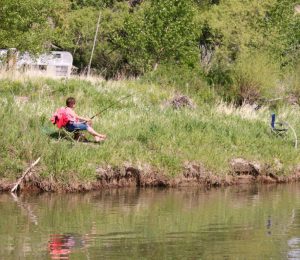 The big question here – will dinner be peanut butter and jelly sandwiches or will it be fresh-caught walleye or trout? This river has been known to offer quite a variety of fish, all in one day.

An afternoon of fishing hadn’t paid off for this lady yet but there was still time.

We were on the banks of the mighty Missouri fairly close to the Virgelle ferry crossing last weekend. Fort Benton was having their annual Spring Fishing Derby and I wondered if this fisher-lady was a contestant.

The entire set-up looked pretty relaxed to me so I doubt if the fishing derby was having any impact on the action. It looked like it was purely an afternoon of getting out under Central Montana’s beautiful big sky on a sunny Sunday afternoon. If a fish was caught, well, all the better. If not, it still wasn’t a bad day!

On the other hand, upstream a bit, this guy had some action on the end of his line.

I was nearby with my camera but not exactly ready to shoot the photo. Good thing I was quick because just a few seconds after I snapped the photo the fish was back in the river. 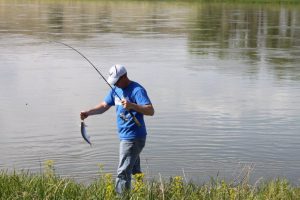 His catch was a goldeye or goldeneye, obviously not what he was hoping to catch!

A bit of conversation later I found out that he was also out just for enjoyment – no contest needed to get his fishing rod out.

I think both of these people fishing the Missouri River were having a fantastic day.