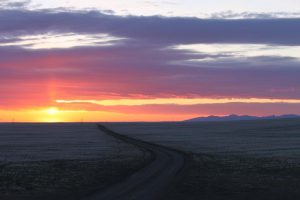 This morning I got up early, packed my video camera and regular camera, and out the door I went.

My destination – 5 miles beyond Carter, Montana, a small town about 25 miles north of Great Falls on US Hwy 87.

It was dark when I left but the sun was about ready to turn in to a full blown sunrise and my camera was handy. I was not disappointed. In fact, I turned on to a county road and stopped after I was about 7 or 8 miles out of Great Falls and started taking photos. Excellent I told myself.

Back on the highway, I pointed my wheels to Carter.

After another 4 or 5 miles I couldn’t help it – I found another gravel road intersecting the highway and I stopped again. Those photos of sunrise were probably the best. I was a little too eager the first time I stopped. 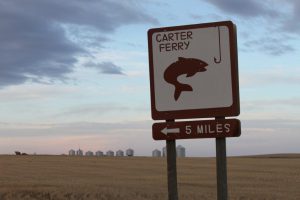 I turned right (east) at Carter and took the gravel road to the Missouri River, 5 miles off the highway. I passed black angus cows and a few calves, lots of grain bins and a herd of about 5 deer.

It must be too early or muddy for seeding so most of the fields were just stubble or winter wheat poking through.

On to my main story which is the seasonal “launch” of the Carter ferry on the Missouri River (also referred to as the Upper Missouri).

The other day I had a visitor call and ask when the river ferries would be going in so I called around until I found the number for the operator at Carter. After a few calls back and forth he told me the Chouteau County road crew would be there early this morning.

In addition to considerable advance planning and equipment moving, it took two road graders, side by side, to move the ferry from the dirt on which it sat all winter. Each one had a rubber car tire on the front of it as a buffer or bumper pad.

It was quite sight to see and, a noisy one at that! 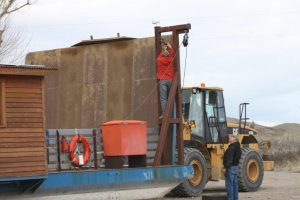 The current ferries are fairly new, about 3 years old. They were constructed to look like the old ones though.

Obvious improvements were made – making the bottom part watertight so you don’t have to bail water when you launch was a good change.

Overhead cables that span the Missouri River are now about 1.5 inches thick.

There are limits to the number of people allowed on the ferry at one time (six total) and two vehicles can be loaded for a crossing. The two vehicle load is hard to believe but I’ve seen that multiple times and they really do fit.

Engines were upgraded and the “buzzer system” to call the operator when you want a ride was connected to a phone line. There is a hand-lettered sign by the river that says “Ring Buzzer for Three Seconds.

It’s about 800 feet across the Missouri River at this ferry crossing. When you get to the other side there are farms and roads that connect travelers to Fort Benton, Highwood and points beyond. Once the ferry is in the water and operating it saves considerable time for locals traveling in the area. 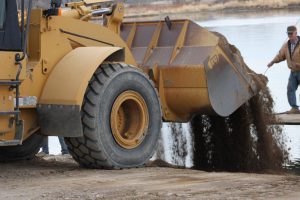 After the ferry was in the water a road grader-type piece of equipment with a bucket on it brought in several loads of dirt to make the landing at the river bank smooth for vehicles to access the ferry.

The final test was to load a vehicle on the ferry and make sure everything worked.

New signs warning river floaters and boaters of the low overhead cable were attached to the cable. I learned that the new signs are made of highly reflective material. With the sun shining on them it definitely proved that point!

Central Montana has three river ferries all on the Missouri River.

Going downstream from Great Falls the first one you come to is at Carter. The second is at Virgelle and the third is about 15 miles north of Winifred (called the McClelland ferry). The Virgelle and McClelland ferries aren’t in the river yet but probably will be in a few weeks. 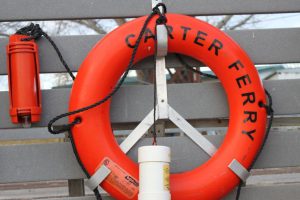 I’ve ridden on all of the river ferries on the Upper Missouri River, many times! It’s one of those unique and fun things to do when you are out for a drive in Central Montana.