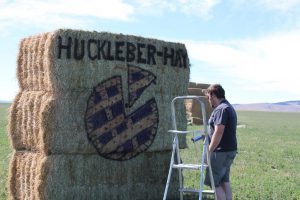 I’ve been thinking for the past 12 months about the MT Bale Trail: What The Hay event and trying to come up with something unique for my bale entry. I had recently been baking cupcakes and had an idea. I thought I could take several of the big round bales and attach chicken wire to them, add a colorful top with an inexpensive vinyl tablecloth and I’d have the perfect haybale cupcake.
Attaching the chicken wire and the tablecloth might be a bit tricky so I wasn’t sure it was the best idea. Except, I had so many kinds of cupcakes where I could use the word hay or straw or bale. The word could easily become cup-cHAYke and the flavors and frostings could have fun names too.
Well, I called the farmer and he said he didn’t put up round bales this year, just “big squares”. The “big square” term always give me a chuckle because those 3′ x 8′ bales are really big rectangles!
Bottom line, my cup-cHAYke idea wasn’t going to happen on a square or rectangular bale. 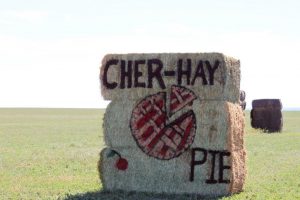 I was still thinking food though and came up with an idea to do bales about Central Montana’s pie trail. The actual name of the trail is Pie a la Road but pie tr-HAY-l would be a fun word and then I thought we could do some different pies on bales.
Fast forward – quite a few cans of spray paint applied from a tall ladder on a very breezy day ended up cre-HAY-ting four bales. The first bale simply had nice lettering saying Central Montana Pie Tr-HAY-l, the next was Cher-HAY Pie with a colorful pie, then Huckleber-HAY pie and finally Rhu-bHAYrb pie.
The pictures of cherry pie and huckleberry pie were easy, even with lattice across the top. Rhubarb, not so easy! I know rhubarb is red and green but the green didn’t show very well and I didn’t want too much red. All in all, they turned out fine and we had a lot of fun.
Winners of this year’s MT Bale Trail had obviously put many hours in to their bale art.
BufHAYlo Jump took first prize with a large stack of big square bales for the jump and several sculpted buffalo going over the cliff. It would be nice to know how those suspended-in-air buffalo were attached but I’m sure it was something beyond what I could do with hay. 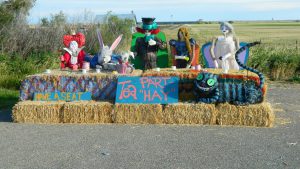 A runner up winner did my favorite bale, a very colorful entry depicting a Mad Hatter tea part-hay. Lots of work went into that too and you could really see it in the hayfield.
I expected lots of political bales this year and there were a few. Most people came up with bales portraying current trends – pokemon and Dory were popular.
The MT Bale Trail: What the Hay takes place the first Sunday after Labor Day each year between Hobson, Utica and Windham. The day before is Lewistown’s annual Chokecherry Festival, and the evening before that (Friday) is the Chokecherry Jam (dance) so you can really have a full weekend of events.
I encourage everyone to get out and enjoy some of the region’s unique events, take some photos and share them with us.