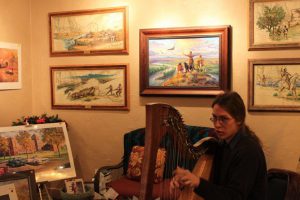 Downtown Great Falls has really seen a blossoming art scene the past couple of years with new studios and galleries opening.

Brian Morger recently opened his studio and gallery at #6 7th Street North, just a few steps away from Central Avenue and across the street from the O’Haire Motor Inn.

I stopped in last Friday evening during the First Friday Artwalk (first Friday of each month) and wandered around the gallery. I wasn’t the only one curious to see Brian’s new digs! There were quite a few people wandering around the gallery and as I was gazing at a painting, someone stepped up and bought it!

A harpist was playing just inside the main door, adding a relaxing touch to the evening.

In addition to Brian’s beautiful artwork, other artists also have paintings displayed.

Brian was born and raised in Fort Benton, MT, about 40 minutes northeast of Great Falls. He has done a variety of subject matter but most of his paintings depict scenes long gone or from long ago. 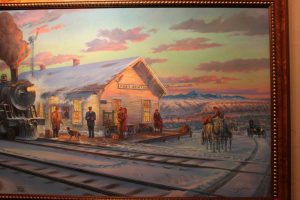 My favorite painting of Brian’s is “Long Way Home” which plays on the story of Shep, Fort Benton’s lovable canine.

Well, I also really like one titled Five After Five, a scene of the Chouteau County Courthouse in Fort Benton. And, I like the old time scene in front of the elegant Grand Union Hotel.

OK, I like more than one and it would be hard to choose my favorite!