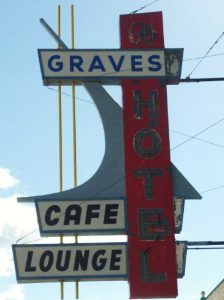 Another road trip popped up on my schedule and this one would take me to eastern Montana. I had a couple of options for highway routes when I left Great Falls and I chose to go through Harlowton.

Harlowton and its neighbor community of Judith Gap are best known these days for the large wind farm between the two towns. I love driving through that area although it’s easy to be distracted by wind towers with blades turning on both sides of the highway.

I had heard that the restaurant in the historic Graves Hotel building in Harlowton had re-opened and I was eager to try it out – a perfect stop for a late breakfast or early lunch. Before I made final plans I called a friend in Harlowton to make sure they were open on Sunday. I was in luck!

It was 10:30am when we got to Harlowton and the Graves Hotel. I was hungry and tired of sitting in the car. But, the sun was shining so nicely on that beautiful old stone building so out came my camera and I started taking photos. 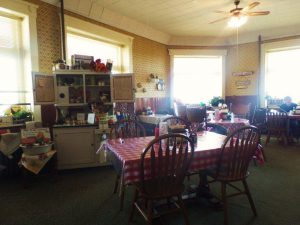 I had never been inside the building. It had a restaurant that was open briefly a few years ago and I never got there. Whenever I’ve been in Harlowton I’ve always admired the structure from the outside though.

Once we were seated in the casual dining area we ordered breakfast from a good selection of entrees. While my meal was being prepared I wandered about the restaurant.

The casual dining area has antiques and crafts for sale, all cleverly displayed. The other customers looked like locals, or they seemed to know the folks working there so I assumed they were all from Harlowton.

Breakfast was good – an omelet made just how I ordered it, plenty of fresh fruit and toast. I ate and ate but finally decided I’d take the fruit along with me in the car.

After we paid for our meals the owner gave us a tour and some history of the building.

The formal dining area is completely finished with a beautiful tin ceiling and period lights. The casual dining area still needs work but I’d say this building has a lot of potential. These old buildings have so much detail. Each doorway had a “G” engraved in the corners for Graves. 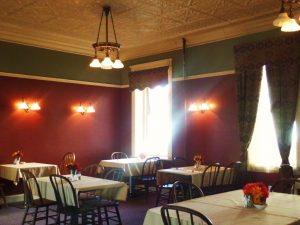 When you first enter the restaurant you see the staircase that goes to the hotel part of the building. The former registration desk is where you pay for your meal and see tempting baked goodies.

Some history – in 1907 Harlowton had a fire that destroyed 24 buildings on Main Street. After that, fire codes were put in place and the Graves Hotel was built in 1909 by A. C. Chris Graves, a prominent businessman. The Graves is made from stone quarried on the site where the hotel stands.

Upon completion the hotel had 150 electric lights, pretty impressive for 1909! It had 45 sleeping rooms and a veranda with views of the Musselshell valley.

The outside of the building has 1908 on the tallest part of the building so I’m assuming that was the year most of it was constructed. All of the literature said it opened in 1909. 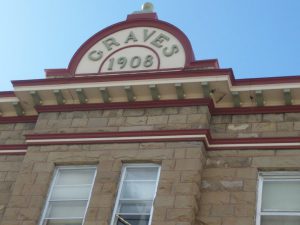 The hotel is now on the National Register of Historic Places. The owners plan to gradually restore all three stories although they will have fewer, but larger, sleeping rooms with bathrooms.

Restoring historic buildings is a true labor of love. The owners already had stories to tell about the boiler system and some construction glitches. I’m glad they have persevered and I hope they can get the structure restored.

Heading to Harlo? I recommend scheduling a stop at the restaurant in the Graves Hotel on Main Street.

1 thought on “Breakfast at the Graves Hotel in Harlowton”