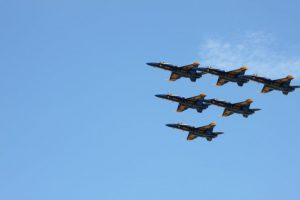 The United States Navy’s Blue Angels flight team put on quite a show in Great Falls, MT today. The event, dubbed “Flight Over The Falls” began around noon and ended around 4pm. Tomorrow’s schedule is the same.

The Blue Angels are part of a two-day free airshow hosted by the MT Air National Guard and Malmstrom Air Force Base. Viewing stations for the airshow are at Gore Hill – where the Great Falls International Airport is located and also the Montana Air National Guard.

Of course, concessions and music are also a part of the airshow. 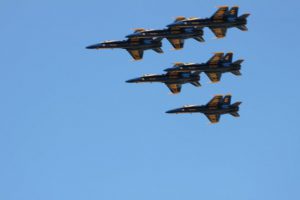 I took a lot of photos and, if I strung them all together, it would look like a movie. In my first photo the planes looked like dots in the sky. I figured they’d be better than that! I just kept shooting and these two photos are by far the best.

It’s a fun event – still going on tomorrow – so plan some time between noon and 4pm to take part in Montana’s Military show called Flight Over the Falls.