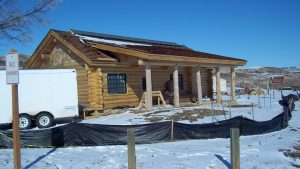 Dreaming of a river float on the Mighty Mo? Well, you can dust off your canoe but it’s a bit early. When “floating season” rolls around though, what a treat it will be to see the new River Contact Station at Coal Banks Landing near Virgelle, MT.

A few years ago the Bureau of Land Management did upgrades to the campground at Coal Banks, a primary launch point for floating the White Cliffs of the Missouri. During summer months there are campground hosts at the site but they’ve pretty much had to operate out of their personal camper.

This photo shows the status of the cabin being built for the contact station. Thanks to Don Sorensen, Missouri River Canoe Company, Virgelle, for the photo and information.

Some trivia – if you launch your canoe or kayak at Coal Banks (8 gravel miles off US Hwy 87, adjacent to Virgelle) and float for most of the day, you’ll end up at Eagle Creek campground. That’s usually my first camping night for this stretch of the river. To get to the next take-out, you’ll probably camp one more night and paddle another half day to get to Judith Landing. OK, start dreaming and by float season this cabin will be completely operational!