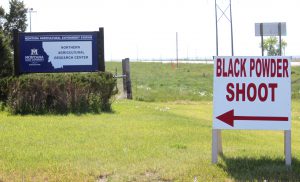 I travel to Chinook, Montana most Memorial Day weekends to connect with long-time friends and spend time with family. Each time I am on US Hwy 87 driving past the site of Fort Assinniboine near Havre, I see a sign about a black powder shoot.

How many times have I planned to stop and check it out and then decided I didn’t have the time? Well, way too many so this Memorial Day I was determined to set aside some time to see the event.

I was on my way back to Great Falls when I turned at the sign for the black powder shoot. I wasn’t sure how far I needed to drive but each time I came to an intersection there was a big red arrow directing me to the event.

As I drove through a gate off the gravel road I saw a lot of campers nestled in the cottonwood trees. I didn’t see anything that looked like an event and I wondered if I had just unexpectedly joined a family reunion!

Before I went too far I saw a young man walking and asked him if I was in the right place. He assured me that I would see more people and some black powder shooters just around the corner. 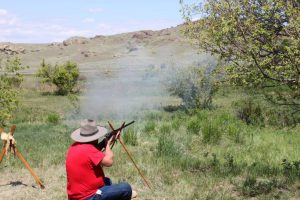 I parked my car and grabbed my camera and a notebook. Several guys were sitting in chairs with spotting scopes and binoculars. Everyone seemed to be watching three guys with black powder rifles. I didn’t want to barge in on anything but I wanted to get permission to get a bit closer and also to take photos.

Finally I caught someone’s attention – OK, I probably was in someone’s way – and I asked if it was all right if I was there. They assured me I could take photos, even get a little closer but then asked where my ear protection was. Darn, I didn’t think about that but someone casually produced some ear muff-like protectors.

I put the ear muff protectors on and wandered a bit closer. Jeez, for powder, that stuff made an amazingly loud boom! I was very thankful to have the ear muffs and won’t even complain about how hot they were. 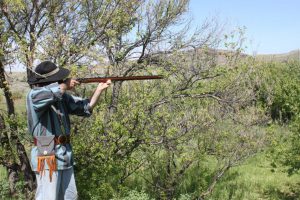 Some of the shooters were dressed in period clothing from the mid 1800s, some wore regular clothes. While each match was going on nobody conversed much. I kept wondering how I was going to figure out what they were shooting or how they scored. Everyone seemed to know except me!

Finally, there was a small break in the action and I was able to visit with some of the attendees.

Targets had been placed in different locations at specific distances. What I was watching was the longest distance shoot and that was 580 yards. Other targets varied from 270 yards to 368 yards.

There was a large whiteboard nearby with scores posted and the event was about to wrap up as soon as the last rounds were tallied.

Different categories included shooting in specific distances but also with black powder round balls and then black powder cartridges. 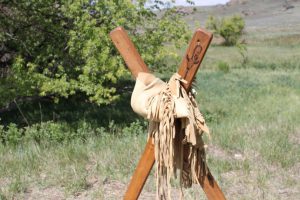 I visited with a shooter in period clothing and found out he made just about everything he was wearing.

Several competitors had skills from blade smithing to woodworking. Many had made and donated items to be given as prizes for the competition.

One interesting story about the prizes – a nearby area had a fair amount of beetle-kill pine trees. A shooter had harvested the trees and made chairs and shooting tables out of the wood.

The Bullhook Bottoms Black Powder Club was formed in the 1970s. This was their 36th Annual Spring Shoot and it is an open invitation to other shooters. The Havre-based club also holds monthly shoots.

The more I learned I realized this seemed like one big family.

Several people told me it was an open shoot and anyone was welcome to attend and participate. The event is always held Memorial Day weekend and it is family friendly. 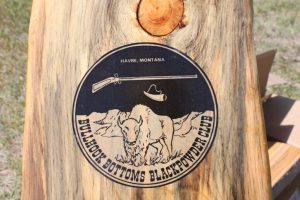 It is also open to spectators and I complimented the organizers on their signs – the sign near the highway was huge and at each possible turn in the few miles I drove there was a bright red arrow pointing the way for me.

It’s about time I finally took time to attend this event. As I left I wish I had also seen the shooting action on the other two days.

Next year I just may have to stop earlier!