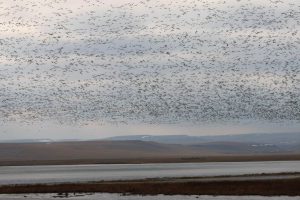 I drove up to Freezout Lake Wildlife Management Area between Fairfield and Choteau late yesterday afternoon. It’s an odd spelling on the WMA name, but that’s another story!

From Great Falls to Fairfield is about a 35 minute drive for me and well worth the time. Last spring I also went up to see the birds and I vividly remember the weather. Brrr…about an inch of snow had appeared the night before and a steady wind coming off the Rocky Mountain Front. This year was different though. We’ve certainly had our typical spring weather – snow one day, it melts the next day, sunshine, then back to cooler temps. I checked my weather app and the temp yesterday was about 32 degrees, a bit of a breeze but not bad. 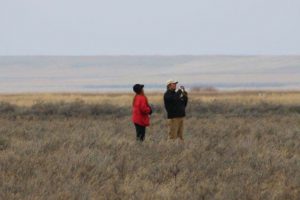 The phone recording at Freezout Lake WMA (406-467-2646) said numbers were a bit lower this year, perhaps due to our erratic weather. Ponds at the area are still iced over so conditions aren’t optimal for the birds. Although, they estimated between 70,000 – 80,000 snow geese were there, 500 tundra swans and a good amount of northern pintails. I also found out that the snow geese weren’t on the northernmost ponds, they were mostly congregating in the main pond. Good thing to know so I could be in the best location.

When I first arrived I parked not too far from the headquarters office and in about 10 minutes I saw a fairly amazing lift off of birds. They looked dark in color and I wasn’t sure if they were the “white snows” as some refer to snow geese. I took a fair amount of photos but I was disappointed in the location I chose. I drove further in to the area and saw a few other vehicles parked. This was where I wanted to be. 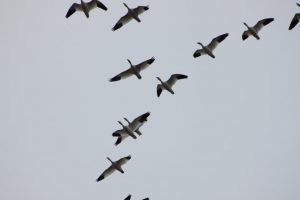 About 10 minutes later I witnessed another amazing “lift off”. Then, again, about another 10 minutes later, a final lift off. Each time a group of birds did this the sound of honking was loud and the skies darkened with all of the birds covering what little sunshine there was. What an amazing sight to see!

The snow geese are basically resting up for the final leg of their journey to Canada, probably Alberta and Saskatchewan since our central flyway pattern feeds those two provinces. If the birds stay close to the Rocky Mountain Front they get some helpful updrafts from the breezes over the mountains – almost like cruise control for birds. These birds have more than likely flown from California and yup, they are tired so this is a nice resting spot. 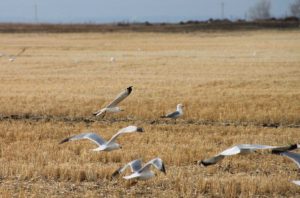 So, when the birds do their evening lift off where are they going? Well, supper is in the nearby barley and wheat fields in the Fairfield and Choteau areas. You’ll see lots of birds, not just snow geese. Since grains are pretty easy picking here, this area is definitely “birdy”. Gulls need food too and they were congregating in one nearby grain stubble field as I left Freezout.

If you combine the location on the birds’ route, the updrafts aiding their flight and the plentiful and nearby food supply, Freezout would definitely be a “destination resort” for the birds. It was my destination yesterday and I was not disappointed!