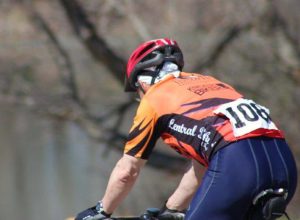 I wanted to get them coming up a hill in an open area but the timing didn’t work. I had committed to a volunteer opportunity that started right after the race would begin so I figured I would only able to catch the racers as they left the staging area.

A parking area at Broadwater Bay was the staging area and it was beautiful – late morning sun glimmering on the Missouri River with a temperature near 60 degrees. It would get even warmer as the day progressed. Yes, spring has arrived!

I went upstream a bit to Elks Riverside Park and crossed the road to get a better shot.

Camera ready – check. I-Pad ready in case I want to do video – check. I waited. I tried to be patient but I knew I couldn’t stay too long or else I’d be late for my volunteer job. 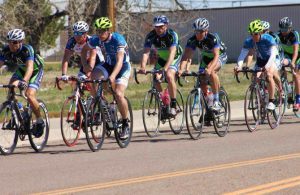 All of a sudden I saw one bike rider blazing towards me. I thought my camera was ready but the lens cap was still on to protect it from the bright sun. Dang! I did get two photos of the advance rider – one was blurry and the other was his backside!

While I was looking at my digital photos on my camera, all of a sudden I heard something. At first it sounded like running water but it was the noise from about 15 bike racers coming towards me at top speed.

Quick, switch out of review mode, focus and get a shot. I didn’t get many photos but thankfully I was able to get these!

I saw three separate groups that would bike this race. All seemed filled with adrenaline to get those bike wheels turning. I wish I could have stayed to see the ending. Maybe next time!