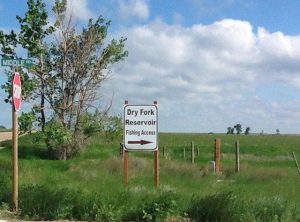 I was up very early the first Saturday in June and picked up my four year old granddaughter. We left Great Falls on US Hwy 87 and pointed the car towards Chinook, site of the First Annual Chinook Rod & Gun Club Kids’ Fishing Day.

Some people would ask why I didn’t take her to the Kids’ Fishing Day a couple miles outside of Great Falls. The answer – my brother was the main organizer of Chinook’s first venture for Kids’ Fishing Day and I wanted to support his project.

My granddaughter is up early anyway. It’s people my age who realize that Saturday could be a day where you grab an extra 40 winks of sleep and not have to be up and moving.

We had a beautiful drive, about 2 1/2 hours, to Chinook. There was very little traffic – who gets up that early on Saturday? We even had enough time to stop and buy worms for our day of fishing.

Dry Fork Reservoir is north of Chinook about 8 miles and that was our final destination. I had been there several years ago in the fall and I didn’t remember it being so pretty. With all of the spring/early summer rain we have had everything was looking green. The reservoir was beautiful blue, the grass was green and the Bear Paw Mountains off in the distance formed a perfect backdrop. 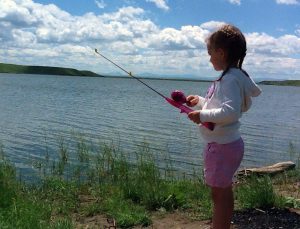 We registered for the fishing day, loaded with anticipation of catching one of the 4,000 fish I knew had been recently planted in Dry Fork Reservoir.

Our potential door prize winning ticket was deposited in the canister designated for four year olds. We were a bit early and when the ticket went in the canister I was sure it was the only one there. Even though we were early I felt that was a lucky sign for us. At least, maybe she would win something.

The next part was getting the precious worm on the hook. Ugh. It’s just a funny feeling when the worm is wiggling. Success prevailed and all we needed to do was cast far enough out and be patient.

After awhile, waiting for a fish to bite gets boring for a four year old. We waited, waited some more, did more casting and checked the worm. A guy next to us even gave us some corn, just a little more enticement for the fish.

Well, she did win a prize and picked out a beautiful bright red fishing pole with shiny gold trim.

That ought to catch the eye of some fish the next time we venture out to test the fishing waters of Central Montana!