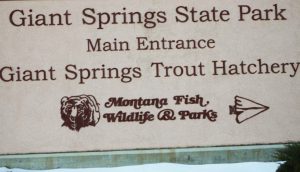 I admit, the first time I heard a friend refer to the CBC I was wondering if it was a new television network. Then, realizing her connection and devotion to bird watching, I carefully said hmmm…the CBC, is that something related to birds?

Sure enough, CBC stands for the Christmas Bird Count. I’ve learned a lot about it since the first time I heard the letters.

In 1900, there were 25 Christmas Bird Counts conducted in response to Chapman’s plea and it is predicted that this year there will be about 2,000 counts with about 60,000 avid birders participating. 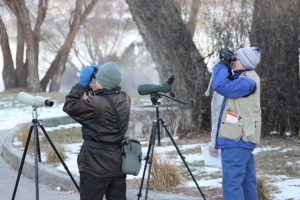 As results are tallied they are loaded in to one site and compiled by the Audubon society. Why do this? It helps to track the long term health of bird populations, and trends can be recorded such as the effects of drought or disaster-related storms.

I was at Giant Springs State Park near Great Falls, MT at 7:45am sharp. The gate to the park was still locked but I saw a car coming my way and it was soon opened. It didn’t take long for one more car to appear, then a couple others.

After getting my camera gear organized I looked at the outside temperature gauge in my car – 18 degrees. It really did feel cold outside but I chose to not say anything. After all, I was just going to be there for about 45 minutes and I suspect these bird watchers were going to be there all morning.

Everyone was quiet – bird sightings and bird calls are recorded by type of bird so you really had to look and listen (and know your birds).

It really was beautiful at Giant Springs and I felt a twinge of guilt for thinking it was too early to be out-and-about on a Saturday and too cold. 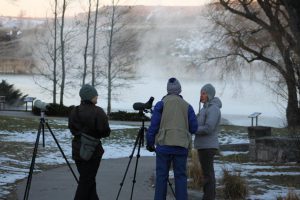 There was an eerie morning mist rising off the springs area, birds were swimming in the cold water and, except for the noise of the water it was quiet and serene.

I’ll be curious to find out how many birds were sighted or heard. I’d also like to know just how long these dedicated volunteers stayed outside counting.

What ever they found or saw will be recorded permanently and just may be something that my grandkids will reference someday. Amazing!