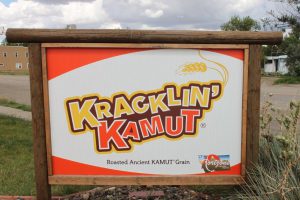 When you say “Kamut” to people they get a quizzical look about them and then I start to explain…this is an amazing ancient grain, never hybridized or genetically modified. And, it’s grown organically in the Big Sandy area in Central Montana.
I’m a big fan of whole grains and this brand of wheat is higher in protein than most wheat on the market today. It also has magnesium, zinc and selenium plus more amino acids, lipids and vitamin E compared to modern wheat. It’s the lipids that give more energy than carbs.
So much for the details I learned!
One product made from Kamut wheat is called Kracklin’ Kamut, a tasty and crunchy snack.
A week ago several of us had a meeting in Big Sandy, Montana and after that we toured the Kracklin’ Kamut plant. They currently make one flavor of Kracklin’ Kamut which is seasoned with salt. Other flavors are in testing phase right now such as a ranch dressing flavor. 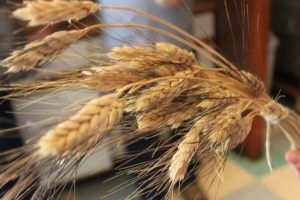 I’ve had waffles made from Kamut flour and also pizza crust made with it. Both had an extra texture to them, similar to a whole wheat flour or slightly nutty tasting. I loved both of them!
The folks who began raising Kamut in Montana are researching whether or not those who are gluten sensitive can digest this product without difficulty. Many people say it works for them but they would like some research to back that up.
Agriculture in Central Montana began many years ago, and the primary grains were wheat, barley and oats. Today we are incredibly diverse and also high in the number of acres of organic crops. Kamut is one of those.
If you see a Kracklin’ Kamut snack at your grocery store give it a try. It’s pretty tasty!