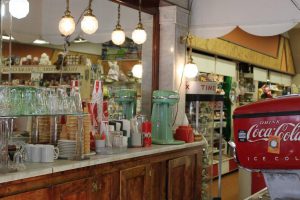 When I was at Olson’s Drug Store in Conrad, MT the other day (checking out their soda fountain) I decided I had to order an ice cream soda so I could see how they are made.

Obviously, I also had to consume it – that was the taste test!

I found out you start with hand-dipped hard ice cream. First though, several squirts of chocolate sauce go in the glass. When the glass was about half full of ice cream more chocolate was added and then a little soda. More ice cream, more soda.

Then, with ice cream piled above the top of the glass, chocolate sauce was squirted into a paper cone and that was artistically drizzled over the top of everything.

The gal making my ice cream soda said she had worked at Olson’s Drug Store over twelve years.

She also said when she learned to make ice cream sodas she was told “they aren’t good if they aren’t messy”.

Well, we had the makings of a mighty good ice cream soda because my glass was so full it was running over the edge.

Before I sampled the ice cream soda I needed to take some photos though. Then, along came a local shopper who agreed to pose with my ice cream soda.

He looked ready to eat this masterpiece so I snapped my photos quickly and then took my place at the marble counter.