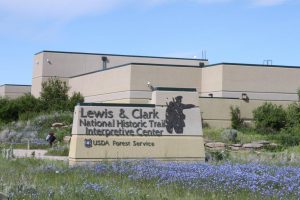 The Lewis & Clark Interpretive Center in Great Falls, MT has been operated by the US Forest Service for the past 13 years.

As we drove in to the Center’s parking lot the other day I was very impressed with the landscaping – particularly the beautiful blue flax that was in full bloom.

Landscaping surrounding the Lewis & Clark Interpretive Center was done in a unique way. When excavation for the building was done, any seeds that were native to the area were saved and replanted. Blue flax was one of those and that flower was also noted and named in the Lewis & Clark journals from their epic journey through here in 1805. Anyway…it was very pretty!

One more tidbit of trivia – the Center has won an award from Briggs & Stratton for their unique landscaping. You can walk around the grounds and any plants that were noted in the journals and replanted have signs by them giving their scientific and common names.

The expedition also encountered a fair amount of prickly pear (I call this cactus). One of the displays or dioramas in the Center shows men on the Lewis & Clark expedition portaging the falls by pulling a dugout canoe up the river bank. It is complete with plenty of prickly pear. 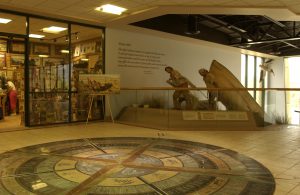 In the Lewis & Clark journals, Lewis wrote quite a bit about his men having to mend their moccasins every other day just from wear and tear from the landscape. Makes you wonder if these guys knew they’d be spending evenings sewing and mending their footwear when they signed up as crew.

The series of waterfalls portaged near present-day Great Falls took the Lewis & Clark expedition about a month. At that time there were five waterfalls. Today there are four because one became submerged when a hyroelectric power dam changed the water’s flow.

From inside the Lewis & Clark Interpretive Center you can look out a huge window to the north and view Black Eagle falls. Lewis noted in his journals that he looked that direction and saw a large black eagle on a tree, hence the name! The community on the north side of the Missouri River is also named Black Eagle.

Visitors to the Center can watch two different films about the Lewis & Clark expedition. You basically go through the exhibits on your own although very knowledgeable docents are located in different areas along the way. The displays don’t just focus on this area. As you follow along on the journey, you will learn about their travel all the way to the Pacific and back. And, you’ll be immersed in history about the Plains Indian tribes they encountered. 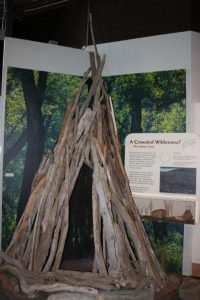 This is another of my favorite exhibits at the Center.

The Lewis & Clark Interpretive Center is open year round. During the summer they are open seven days a week. They close on Mondays during fall, winter and spring.