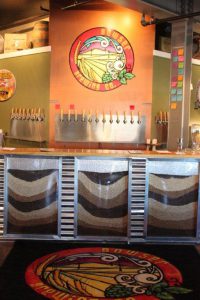 Bowser’s Brewing, located on the corner of 19th Street and 10th Avenue South in Great Falls, gave me a great tour today.

I started my tour with owner, Evan Bowser, telling me that many years ago today (December 5, 1933) the 21st amendment was repealed. That was the amendment establishing prohibition in the US making alcohol illegal.

I had been to Bowser’s a few times before but it had changed.

The seating area of the brewery looked larger and Evan told me they had rearranged the tables and chairs, moved a display case and a couple more items. The brewery and seating area looked great.

Bowser’s has a 7 barrel system – 5 fermenters and 7 serving tanks. They tap beer right from the serving tanks. Bowsers has almost been open a year and in that time they have brewed 39 different styles of beer.

I asked what their best seller is and Evan said it changes with the season. They do seasonal brews and everyone always wants to try the new one. He did say that their Smoot Honey Pale Ale was always a consistent good seller. Smoot honey is made in the nearby small town of Power, MT. 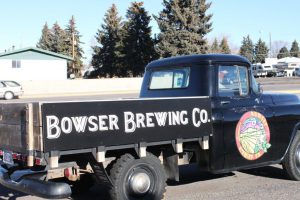 Recently they have brewed a jalapeno heffeweisen and that has been selling very well.

Bowsers just came out with a vanilla bourbon barrel stout. It has 10% alcohol and is pretty dark.

Next up is a barley wine – it’s really a beer but because of the high alcohol content (14%) it is termed a wine. The Montana alcohol limit is 14% so it will be at the peak. I wasn’t sure if that was a nationwide limit or statewide. Evan said it is set by each state and some, like Massachussetts, are much higher.

The walls of the seating area were decorated with paintings by local artist Sheree Nelson. She even painted the floors of the rest rooms – quite a talking point and they looked good.

It was noon and I was on my lunch break so I didn’t sample any brews…but…next time I’ll stop by after work!