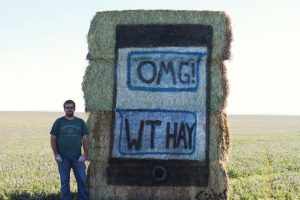 Whether you call it the Montana Bale Trail or the What The Hay, it’s a huge success. And a lot of fun.

I enjoy both aspects of the Montana Bale Trail – building an entry and then going on the main day of the event to see what every one else built.

What is this event?

Twenty five years ago two ranchers in the Hobson-Utica area started it. One put up a corny bale spoofing the other rancher. Of course, a reciprocal bale spoof was in order! And, the rest of the story is all about growing the event, other neighbors joining the bale building and even people like me who live 80 miles away building an entry.

Travelers on the 22 mile route the day of the event are another facet for this gem of an event. Between 6,000 – 7,000 people attend the big day which is always the first Sunday after Labor Day. I’d like to have a “counter” on this route the week following the event to see how many folks come out when the crowds are gone.

How has it grown? 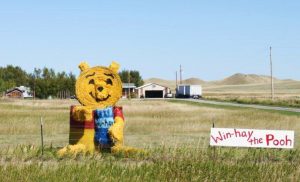 This year there were almost 50 bale entries. The Utica Women’s Club organizes a huge craft fair with vendors and food. The Oxen Yoke bar in Utica sets up outside seating for their huge grilled burgers. The Midway Caf-hay is located, can you believe it, about midway on the route! There is a free hay-maze by the Midway Caf-hay and several preserved bale entries from previous years are displayed. On the lawn of the Hobson Library & Museum there are several entries in the Hay-zoo. This year they even had an elephant sculpted from hay that spouted water through his snout. Snoop-hay, a couple of Minions from Despic-hayble Me, an allig-haytor and much more all appeared on the lawn. Hobson restaurants get in to the game with entries built outside their businesses and even the Bar 87 at Windham had a Miller Hay-Life bale entry.

If you are on US Highway 87 between Great Falls and Lewistown you’ll have two entrance/exit points for the Montana Bale Trail. Hobson is one, Windham the other, and the little town of Utica is in-between. The route is about 22 miles, all paved, and you drive past well-kept farms and ranches.

What does it cost? 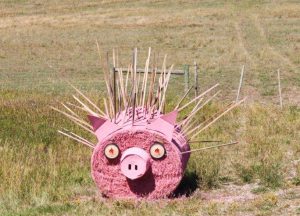 There is no charge to view the Montana Bale Trail and you even get a chance to vote for your top three favorite entries in the People’s Choice section.

This year I did a completely different bale entry and I’ve already come up with an idea for next year’s entry. I even wrote it down so I’d remember it. When you are driving the route all types of ideas pop in to your head. Then, when the time rolls around I struggle so that’s why it is written and attached to my calendar!

The event is all about having fun and good times in Central Montana, enjoying our rural communities and our farmers.

Put the Montana Bale Trail on your calendar for next year, first Sunday after Labor Day. Psst…videos of past events and a 2015 calendar with event photos are for sale.