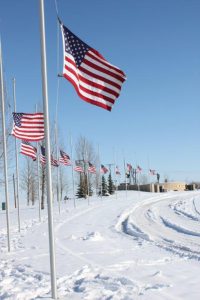 In the United States, Veteran’s Day is commemorated in November, most appropriately on the 11th day of the 11th month at the 11th hour.

Veteran’s Day fell on a Sunday this year and local veteran’s organizations held ceremonies and gatherings.

The Veteran’s Memorial Wall overlooking the Missouri River was scheduled to be the site of one event. Due to recent snow and some chilly winds that day, it was moved inside to the adjacent Centene Stadium.

Members of all branches of the US Armed Forces participated.

Great Falls mayor, Michael Winters, is a retired Marine and he was connecting with everyone who arrived at the Veteran’s Memorial Wall to make sure they knew where the actual gathering would be held.

With our recent heavy snow the area looked beautiful. 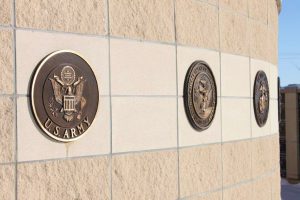 Contrast with the bright snow from the red, white and blue flags was great and the bronze medallions of each branch of the Armed Forces glimmered in the strong sunlight.

Even though it was cold outside I stayed there for quite awhile just taking photos.

Our good neighbors to the north in Canada also reflect on this day too and it is called Remembrance Day in the provinces.

No matter what the day is called it is a time to reflect, remember and thank our veterans.