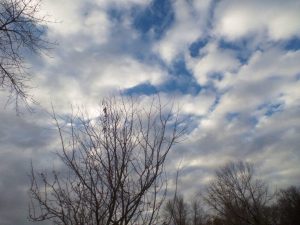 When I say “we” visit Giant Springs State Park it means that I and about 40 people on a bus went to this highly visited park the other day.

Named for the bubbling freshwater springs, this area was noted by Capt. William Clark (of Lewis & Clark fame). He wrote in his journal “the largest fountain or spring I ever saw”.

Giant is a good way to describe the spring. On a daily basis this spring bubbles up over 156 million gallons of water. That’s a lot and it’s one of the intriguing facts that local historian and tour guide Don Peterson gave the group when we toured the park.

It was a relatively warm fall day when we were at Giant Springs. Leaves were beginning to fall from the many trees there but most still had their foliage. As we stood under the shade of the trees it seemed chilly and a few folks grabbed a jacket. Still, it was one of those great fall days you’d like to capture.

This park is much more than a typical park. Covering 117 acres, it also houses one of MT Fish, Wildlife and Parks’ trout hatcheries. That cool and fresh water bubbling up from the nearby spring would be perfect for hatching trout. 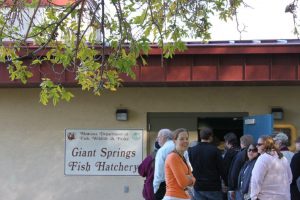 There are several trout ponds with different sizes of fish and a pond that is basically used just for viewing.

Our group walked through the small visitor center with interpretive panels about the stages of life for fish.

As you exit the door of the visitor center you are right by the trout ponds. If you are a fisherman, you are probably having thoughts about catching one of those trout.

Someone asked about fishing in the area and that question couldn’t have been planned better. 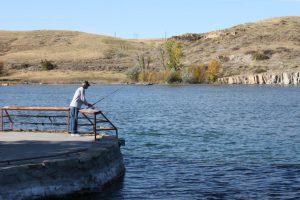 Just a few yards away there was a local guy with a fishing rod testing the waters of the Missouri River.  I snapped his photo but didn’t ask if he caught any fish.

A little more trivia about the area – Giant Springs became a state park in 1977.

It’s the location of the Roe River, named roe for the fish eggs at the trout hatchery. The Guinness Book of World Records used to have a category for the shortest river in the world and the Roe was listed as that. Residents near an Oregon river also had their “shortest” listed and the two bantered back and forth. There is no longer a category for the world’s shortest river but we are still mighty proud of this little river.