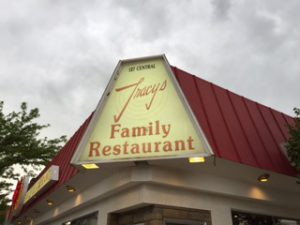 The other night I took my two granddaughters out to dinner and I thought they might enjoy going to Tracy’s Restaurant in downtown Great Falls and playing the jukeboxes in the booths.

I eagerly told them where we were going to go for burgers and fries and said we could play the jukebox.

Jukebox? They looked at me and said “what’s a jukebox?”.

So much for my big surprise – they didn’t even know what it was!

Well, darn it, we were still going to go. Off we went, my expectations rather high, theirs rather questioning. 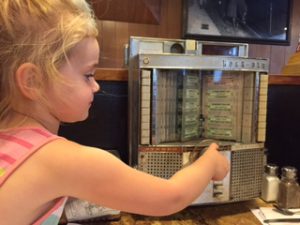 We found a booth with an old jukebox on the table but I told them we needed to figure out our order before we played music.

The waitress came quickly, before we had decided what to order, but she said she would come back. A burger and fries for one, chicken strips and fries for the other – pretty simple and that’s the type of food you can get at Tracy’s.

I wasn’t sure what the little jukebox took but I tried a quarter and suggested a song to one of my granddaughters. She pushed some buttons and was kind of excited when the music started. We had more “plays” for my quarter so my other granddaughter picked her song.

We didn’t spend many quarters, three I think, but it kept the girls busy until our food arrived.

The selections on the jukebox are old (really old), just my kind of tunes, but my granddaughters would probably have liked something a bit more current. They did have fun with the jukebox though. 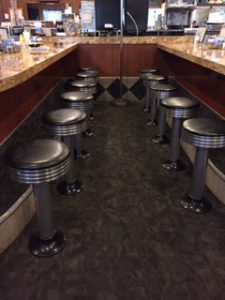 I began to think of all of the ways kids get music these days – on their parents’ phones via iTunes, Youtube and Pandora, on music channels on TV, on iPods, and the list goes on.

As we left Tracy’s Restaurant I noticed a very sleek, current-looking jukebox near the cash register. I didn’t take time to see if the music on it was old-time tunes or new ones – I didn’t want to know. I’d rather remember this as a trip down memory lane, old time jukebox equipment and old time songs.

Some day, my granddaughters may take their grandkids to a place to show them some outdated iPhone 6 or an iPod. I realize we have made progress with tech equipment but some days it’s kind of fun to put a quarter in the jukebox and listen to an old tune.

Thanks for the memories Tracy’s!