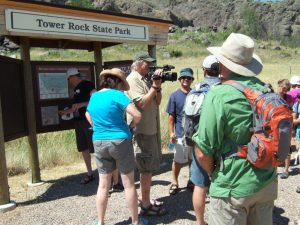 When we finished floating the Missouri River near Cascade the other day we took our rafts out at Prewitt Creek. Just around the corner from the take-out at Prewitt is Tower Rock State Park.

We were running a bit ahead of schedule so a last-minute plan was hatched to make a stop at Tower Rock and hike.

I’ve hiked at Tower Rock before but this day was warm (translate that to hot) and it was about 1pm. It’s a fairly short hike on the maintained trail but we had some over-achievers in this group and they chose to head way up to the top of the tallest rock!

Not me! About half of us turned back when we reached the end of the trail and sought a bit of shade and refills for our water bottles.

This area is loaded with history so I was glad to share it with our visitors. When we got back to the parking area we chatted about what it would have been like in this location a couple hundred years ago. 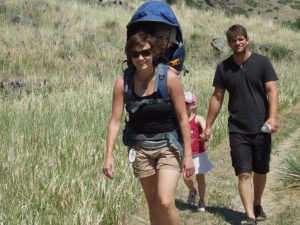 The Lewis & Clark expedition had traveled across the plains of nearly two-thirds of what we call Montana and they would have been standing in this spot. The trip hadn’t been easy but game was plentiful (enough food to eat), they had a water route to follow (although against the current) and they had just portaged the 5 waterfalls of the Missouri (whew!). I imagine the captains were thinking the worst was behind them. When they reached the Tower Rock area, a quick climb to the top and a glance around changed the tone – nothing but mountain ridges for miles and miles.

Obviously, I would not have been a successful member of the Lewis & Clark expedition.

As we worked our way back to the parking area at Tower Rock we met this happy looking family – out for an afternoon hike. I felt a bit guilty for being a hiking wimp when I saw the backpack and baby on this gal’s shoulders.