Harvest Moon Brewery is located in the small town of Belt, MT. They were the area’s first new brewery in a long time. Many years ago there was a brewery in Great Falls but it has been closed for quite some time.

The first brew developed at Harvest Moon was Beltian White…note that it is Beltian, not Belgian, since it is named after the town (Belt) where the brewery is located.

Following Beltian White which is a pale ale, a much darker brew labeled Pigs Ass Porter was brewed. The last few years have seen a new version of Great Falls Select, an IPA and Charlie Russell Red developed.

I toured the production line and I decided it was a plumber’s dream. Tubes go from the vats along the ceiling, down into different equipment…it could be a nightmare if something goes wrong!

They have quite an investment in their bottling and canning equipment and have expanded their facility several times to accommodate everything. 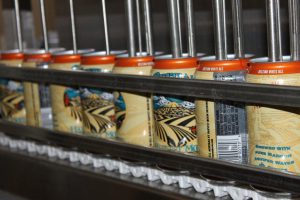 A tasting room is open to the public and while we were getting ready for our tour another couple on vacation in Montana stopped in and asked to join us. Sure, we said!

Our tour guide told us that the town of Belt sits on top of the Madison Aquifer which means superb water for their brew. The community is also surrounded by grain growers – both wheat and barley – and the brewery purchases as many local grains as possible.

When the brewing process is complete the leftover grains are called spent mash. That mash goes to a local pig farmer to feed his hogs and that’s where the name for Pigs Ass Porter came from.

When I left Harvest Moon I had a great appreciation for all that goes in to the brewing process before that ale comes out of the tap.