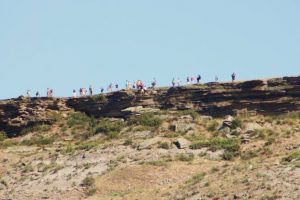 First Peoples Buffalo Jump State Park was our first visit Sunday morning. There was a bit of haze in the sky although the dramatic icons of this area, square butte and the incredibly long cliff face forming the buffalo jump, were still very visible.

Our group headed to the top of the buffalo jump for some history and a chance to imagine themselves as one of the many Native American tribes who used this unique cliff to harvest their food (and much more) before the use of horses and firearms.

There are many buffalo jumps in Montana but this one is very long and seemed to have enough attributes that it was used frequently by many different tribes.

Drive lanes where buffalo were stampeded are still visible today. The sheer length of the cliff face also makes for some stunning photos!

This first photo was taken from near the Visitor Center at First Peoples Buffalo Jump so I probably should have titled this “The View From the Bottom”!

Our group loved the views and later on several were overheard saying that they now understood why Montana is called Big Sky Country. 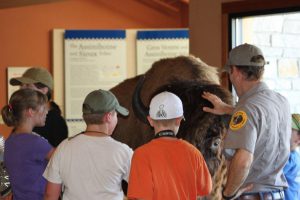 The next area of the park we visited was the Visitor Center near the base of the cliff. This state park can easily accommodate large vehicles – plenty of bus and camper parking, in addition to passenger vehicle parking.

Part of our group got up close to a buffalo. It was not alive! He watches over the indoor lobby of the center. In fact, just about every time I’m at First Peoples there is someone using this big guy for a photo op.

Stay tuned – our next activity is learning how to play traditional Indian games.